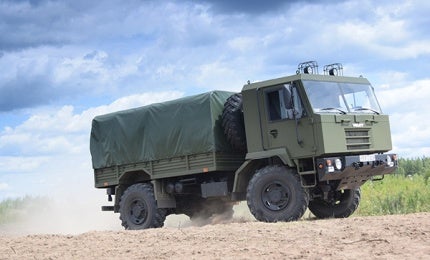 The State Border Committee of Belarus ordered 25 MZKT-500200 tactical trucks to serve its border security forces. The vehicle was unveiled in 2013 during the Belarus Independence Day military parade in Minsk.

Orders and deliveries of MZKT-500200 trucks

MZKT-500200 tactical trucks will replace the ageing GAZ-66 and GAZ-3308 Sadko vehicles currently in use by the Belarusian Border Service.

State trials of the MZKT-500200 prototype were completed in May 2014, and serial production commenced later in 2014. Lida-based Neman Automotive Assembly Plant, a branch of MZKT, was responsible for manufacturing the vehicle frames, flat truck bodies and cabs, as well as performing the chassis assembly.

The first batch of nine production vehicles was delivered to the State Border Committee of Belarus in February 2015. The vehicles will undergo performance tests in the city of Dzerzhinsk, before being assigned to the Belarusian border outposts.

"The MZKT-500200 tactical truck can be armed with a roof-mounted machine gun and light anti-tank weapons."

The gross and kerb weights of the vehicle are 8.85t and 5.85t respectively, and the payload capacity is 3t.

The MZKT-500200’s modular cab structure, made from steel, accommodates one driver and one passenger, and can be accessed through two side-doors. Covered with canvas cover and bows, the cargo compartment at the rear section can carry approximately 21 personnel and military equipment. It is equipped with drop sides and a drop tailgate for optimum accessibility.

The MZKT-500200 tactical truck can be armed with a roof-mounted machine gun and light anti-tank weapons, as an optional extra.

Powertrain of the military truck

Volat’s transport vehicle is driven by a YAMZ-53452 in-line four-cylinder, turbo-charged diesel engine that is coupled to a five-speed, mechanical, synchronised transmission system. The engine, developed by Yaroslavl Motor Plant, generates a maximum power of 158kW and a torque of 735nm. The vehicle has a 130l fuel tank and can be optionally fitted with an additional fuel tank.

Independent suspension on all wheels is provided by coil springs and heavy shock-absorbers. A front-drive steer axle and a double-reduction rear axle are fitted to afford the central reduction gears with planetary wheel hub reduction. The inter-axle and cross-axle differential locks increase the traction.

In addition, the MZKT-500200 vehicle is equipped with a two-speed transfer case and Kama-401 wheels. Its direction is controlled by a hydraulic-powered, left-hand drive steering system through a dual-air brake.

It is equipped with a 24V electrical system and two 190Ah batteries. It can be optionally fitted with an anti-lock braking system, run-flat tires, and a central tire inflation system.

The vehicle can ford at 1.5m, cross trenches of 1m, and can climb vertical steps up to 350mm. Its approach and departure angles are 40° and 32° respectively. It can withstand temperatures ranging from -40°C to 50°C.