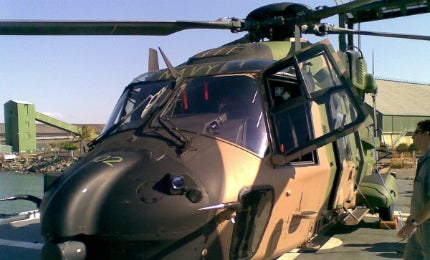 The MRH90 is being inducted into one special operations support squadron and one maritime support helicopter squadron of the Australian Defence Force (ADF). These squadrons provide tactical air mobility and maritime support from land bases and Canberra Class amphibious assault ships. The helicopter can fully interoperate with Nato forces.

“The MRH90 is being inducted into one special operations support squadron and one maritime support helicopter squadron.”

The Australian Ministry for Defence initially approved the purchase of 12 MRH90 helicopters under the Air 9000 programme in August 2004. The contract was signed in June 2005.

Australia ordered 34 additional helicopters in June 2006, bringing the total orders of MRH90s to 46. The deliveries are scheduled to conclude by 2014.

The Australian Armed Forces received the first two MRH90 helicopters in December 2007. The ADF grounded the fleet of MRH90 in April 2010 due to the failure of an engine in one MRH90 helicopter. The flight operations were resumed in July 2010.

Australian Aerospace signed an agreement with Australia in November 2011 to resolve the identified flaws in MRH90 for ensuring timely deliveries of the helicopters. The 15th MRH90 helicopter was handed over to the ADF in December 2011.

CAE will deliver two MRH90 full-flight and mission simulators (FFMS) to the US Army under a $160.8m contract signed in December 2007.

The first of the two MRH90 FFMS was delivered in August 2013, while the second one is expected to be delivered by 2014.

The MRH90 features a full composite, crash-worthy fuselage integrating a constant central cross section. It incorporates crash-worthy capabilities based on MIL-STD-1290A. The structure offers protection up to a speed of 10m/s when landing gear is extended and up to 7m/s with retracted landing gear.

“The Australian Ministry for Defence initially approved the purchase of 12 MRH90 helicopters under the Air 9000 programme.”

The forward section of the fuselage contains the cockpit and the centre fuselage integrates a spacious, unobstructed cabin. The cabin is fitted with a sliding door on both sides and a ramp at rear. The cabin offers sufficient room to house 20 crash-worthy troop seats or up to 12 stretchers.

The MRH90 measures 16.13m in length and 5.23m in height. The maximum take-off weight of the helicopter is 10,600kg. The helicopter can carry two pilots and 20 fully-equipped combat troops.

The full glass cockpit of MRH90 houses two crash-worthy seats for the pilot and co-pilot. It is also fitted with a foldable crash-worthy jump seat for an additional crew member. The instrument panel is installed with five 8″x 8″ colour multifunction displays (MFD). The information related to flight, mission, systems and maintenance is displayed on any preferred display.

The avionics suite of the helicopter is composed of core avionics system and the mission system. The core system includes the all fundamental systems, which are essential to manage the basic aircraft capabilities. The mission system allows the management of tactical communications, flight planning and mission equipment deployed in different missions.

The redundant fly-by-wire (FBW) flight control system of the MRH90 enhances manoeuvrability and reduces the workload of pilots. The helicopter integrates a Monitoring and Diagnostic System (MDS) to check the operation of various equipment and sub-systems. The MRH90 is also equipped with weather radar and forward looking infrared (FLIR).

The helicopter is fitted with a tricycle type retractable landing gear including two single-tire main units and a twin-wheel nose unit. The main units retract into the centre fuselage, while the twin steering wheel pulls back into the forward fuselage.

Performance of the Australian helicopter

The operating service ceiling of the MRH90 helicopter is 20,000ft. The helicopter can climb at rate of 8m/sec and can fly at a maximum speed of 300km/h. The range of the helicopter is 800km. The flight range can be further increased with the addition of external fuel tanks.

The Bushmaster 4×4 armoured vehicle is currently deployed in Afghanistan with the Australian Army.