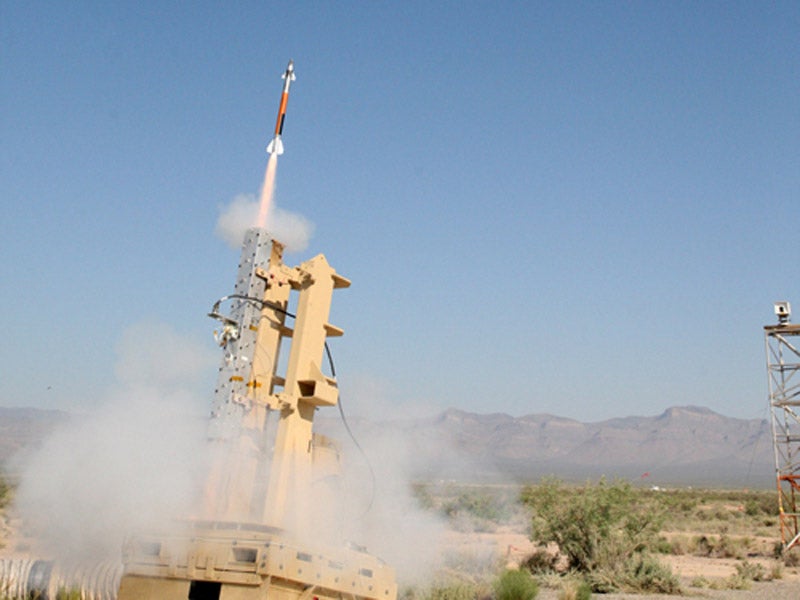 Miniature Hit-to-Kill (MHTK) interceptor missile is developed by Lockheed Martin for the US Army, as part of the Extended Area Protection and Survivability Integrated Demonstration (EAPS ID) programme.

The long-range interceptor is designed to improve the US Army’s missile defence capabilities against counter-artillery, rocket and mortar threats (C-RAM), and offers high single shot probability of kill.

The MHTK’s agility and aerodynamic capabilities have been demonstrated during a test firing of the missile from a MML launcher at White Sands Missile Range in New Mexico, US, in April 2016.

A series of target tracked tests were conducted in April 2012. A controlled test vehicle flight test was conducted by Lockheed Martin in collaboration with the US Army in May 2012, to demonstrate the missile’s performance and to collect critical data.

Lockheed Martin and the US Army conducted the first guided test flight of the MHTK missile in March 2013, to evaluate the functionality of the missile’s seeker, guidance, navigation and control systems.

Four small wings located at the front of the weapon provide guidance and stability during the flight. The rear section also features four tail fins for increased manoeuvrability.

The missile is associated with a number of components consisting of launcher, radar set and engagement control station. A radio / RF data link facilitates communication between the operators at the ground and the MHTK interceptor in-flight.

A high-frequency fire control sensor illuminates the target and directs the missile in all weather conditions. It comprises an active electronically-scanned array (AESA) antenna and provides 45° field of view in elevation angle and can cover a scan angle of up to 90°.

The guidance system with a high-frequency semi-active seeker is fitted in the front section of the missile. The seeker allows the missile to lock-on to the incoming target at the acquisition point.

Propulsion and performance of the interceptor missile

Powered by a solid rocket propellant motor, the MHTK interceptor missile has a range of more than 3km and can directly hit enemy targets through kinetic energy.

“The long-range interceptor is designed to improve the US Army’s missile defence capabilities against counter-artillery, rocket and mortar threats (C-RAM), and offers high single shot probability of kill.”

It reduces collateral damage to help protect the army’s deployed troops and other friendly forces.

The MML is capable of 360° rotation and 0-90° elevation. Consisting of 15 tubes, the launcher can be installed on a medium tactical vehicle.

A single launch tube of the MML can hold multiple rounds of MHTK guided missiles.

Lockheed Martin’s EAPS ID programme has been selected for the US Army’s Indirect Fire Protection Capability Increment 2-Intercept requirement. It aims to develop a missile system to provide operational effectiveness against C-RAM threats at tactical ranges, while providing enhanced protection for the soldiers.

It consists of a number of interceptors, launchers, battle management systems, radars, and fire control sensors.