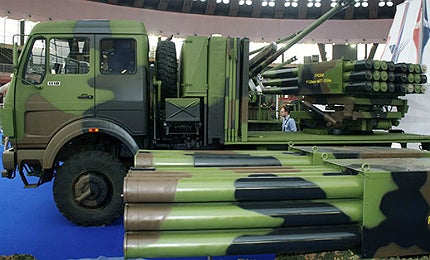 The LRSVM artillery rocket system is used to conduct rapid precession attacks against personnel targets and fortifications, as well as light armoured vehicles. It can also be deployed in autonomous strike missions.

The LRSVM system was unveiled for the first time at the PARTNER 2011 Weaponry and Military Equipment Fair in mid 2011. The system is currently being offered for the Serbian Army.

"The LRSVM system was unveiled for the first time at the PARTNER 2011 Weaponry and Military Equipment Fair in mid 2011."

The LRSVM design is based on the polymorphous concept allowing the launch of rockets with different calibres and warheads. The launch system is based on the 4×4 truck chassis. The vehicle can accommodate a payload of 6,000kg.

The modular design accepts the modern rocket systems according to the changing requirements of modern warfare. The design also integrates modular subsystems complementing the launch of rockets suitable for different ranges.

The modular launch system of the LRSVM includes an interchangeable launching pod for single or multiple uses. The launch platform is fitted with two types of launching containers. The two piece launching module can fire a total of 16 Plamen rockets, of which short-range Plamen A has the range of 8.6km and Plamen D has a range of 12.6km.

The launch platform can be mounted with 12-tube launching containers to fire either Oganj 128mm or Grad 122mm rockets. The Oganj rockets can be fired for a maximum range of 22.5km and Grad rocket can be launched to a maximum range of up to 35km. The Grad rocket is propelled by a mixed propellant motor. It carries a pre-fragmented high explosive warhead filled with enhanced power explosive.

The LRSVM is equipped with fully-automatic targeting control systems. The launch vehicle is fitted with an Inertial Navigation System (INS), GPS unit and absolute encoders for automatic positioning.

"The LRSVM design is based on the polymorphous concept allowing the launch of rockets with different calibres."

The launch system is also integrated with a fire control system (FCS).

The target data is fed into the onboard ballistic computer either automatically or manually for the computation of firing elements, such as elevation and traverse angle of the launcher.

The crew can launch the rockets from inside the cabin or remotely.

The system can fire single rockets or full salvo at a time. The LRSVM can be prepared by a crew of three within 45 seconds. The system can leave the firing position within 30 seconds of completing the firing.

The LRSVM launch system is mounted on the FAP 1118BS 4×4 cross-country truck. The vehicle is powered by a four cylinder OM 904 LA turbocharged diesel engine coupled with FAP 6MS 60-P 98 gear box. The engine develops a power output of 174hp. The vehicle has a fuel tank capacity of 200L.

The truck is fitted with a central tyre inflation system (CTIS). The driver sitting inside the cabin can adjust the tyre pressure according to the type of terrain, for high ride quality. The vehicle can travel at a maximum speed of 80km/h.

The LRSVM launch vehicle negotiates a gradient of 60% and side slope of 30%. It can cross a vertical step of 0.5m and trench of 0.6m. The vehicle is capable of fording a water depth of 0.9m.

The LRSVM can be operated in temperatures ranging from -30°C to +50°C. The system is covered by hydraulically operated canvas cover during the travel. The coverage makes the vehicle to look like an ordinary light utility truck for avoiding the detection. It also protects the launcher from adverse weather effects.