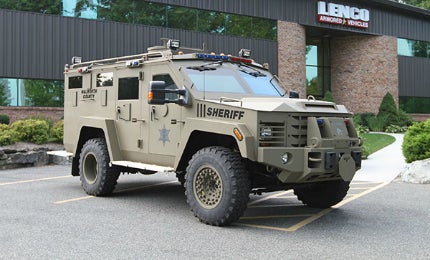 BearCat G3 is a 4×4 wheeled armoured response and rescue vehicle designed and manufactured by Lenco Industries. It is used by the special weapons and tactics (SWAT) units, special rescue teams (SRTs), and military and police forces in tactical roles.

The vehicle was displayed at the US State Department and the National Tactical Officers Association (NTOA) in September 2013. It was also displayed at the SHOT shows held at the Sands Expo Centre in Las Vegas, Nevada, in January 2014 and 2015.

Design and features of BearCat G3

The new Aravis family of multipurpose heavily protected armoured vehicles has been developed by Nexter Systems, who first revealed the vehicle at the Eurosatory show in Paris in June 2008.

The BearCat G3 is based on the chassis of Ford F-550 commercial truck. It features a V-shaped hull made of steel.
Length of the armoured vehicle is 6.3m, whilst the width is 2.4m, and the height is 2.7m. It features an open floor layout with blast-resistant seats accommodating up to 12 personnel, including two on the front seats, eight on the rear bench seats, and two on the jump seats. Gear storage is located under the bench seats.

The BearCat G3 is available in two- and four-door variants. Its windows are fitted with bulletproof glass panel. The vehicle can be equipped with a hydraulic RAM bar, RAM camera, gas injection unit, onboard self-contained breathing apparatus (SCBA), and chemical, biological, radiological and nuclear and explosive (CBRNE) detection system.

The vehicle features two alternators, and a 12VDC electrical system with dual batteries. It also comes with an optional AC/DC power inverter, two front and two rear strobe lights, and eight interior lights. It features a siren and public address system with multi-tone 200W speaker. All switches and electrical equipment of the vehicle include insulation and full ceiling.

Armament and protection features of the BearCat G3

“The BearCat G3 is based on the chassis of Ford F-550 commercial truck.”

The BearCat G3 vehicle is mounted with a rotating armoured turret for housing customer-specific weapon systems. Five gun ports are located on each side of the vehicle, and an additional two on the rear.

The vehicle can withstand multi-hit attacks from high-powered guns firing 7.62mm armoured piercing rounds and .50 calibre BMG ammunition. The armoured hull offers up to B-7 level protection, whereas the fuel tank can withstand blasts.

The vehicle is powered by a 6.7L V-8 turbo diesel engine, which can generate 400hp of power and 880ft-lb of torque. The engine is coupled to TorqShift six-speed automatic transmission system.

A high ground clearance of 14in is offered by the vehicle, as is an aggressive off-road performance, and superior manoeuvrability. The wheels are fitted with Hutchinson VFI 12R x 20 run-flat tires.

The BearCat G3 can run at a maximum speed of 132km/h. Its approach and departure angles are 41° and 25° respectively, and the gradient and side slope are 60% and 38. Its turning radius is 21ft and fording depth is 30in.