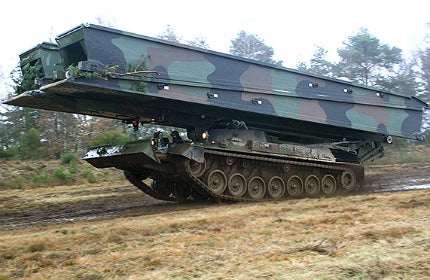 It was designed and developed by Krauss-Maffei Wegmann (KMW), initially for the German Army.

The fully automatic electronically controlled Leguan bridge layer can be laid and rolled back on most of the terrains in about five minutes.

It has a load rating of class MLC 80 (military load classification).

The Leguan system replaced the BIBER. The bridge layer was initially designed to lay one 26m length bridge, and was upgraded in 2009 to lay two 14m bridges.

The Leguan bridge layer, installed on LEOPARD 2 chassis, is deployed globally by more than 14 armed forces.

“It was designed and developed by Krauss-Maffei Wegmann (KMW), initially for the German Army.”

The Leguan bridge layer was installed on tacked vehicles, such as M1A1/A2 tanks and the Wolverine Heavy Assault Bridge (HAB) of the US Army.

The Leopard 1 tanks of the Norwegian, Belgian, Chilean and Greek Armed Forces were mounted with the Leguan bridge layer.

The Leopard 2 of the Finnish Armed Forces, M60/M47 tanks of Spanish Army and PT91/T72 tanks of Malaysia were also installed with the Leguan bridge layer.

Leguan bridge layers are mounted on wheeled vehicles such as MAN 8×8 off-road trucks of the Norwegian, Dutch and Singapore armed forces, and SISU 10×10 off-road trucks, of the Finnish Army.

“The Leguan bridge layer, installed on LEOPARD 2 chassis, is deployed globally by more than 14 armed forces.”

The bridge layer, fitted with a 26m bridge and one 14m bridge, can cross obstacles of 32m. The bridge can be changed from 26m to 14m without any additional fittings.

The bridge layer can be controlled by a single operator. The driver or commander can lay the bridge by using the operating elements and a graphical user interface (GUI).

The Leguan bridge layer is installed with an integrated programme for self-test that ensures high reliability. It is built with a horizontal laying technology, which ensures low silhouette on missions.

Leguan bridge layer can be used as a floating bridge and ferry by installing additional pontoons and hydraulically operated ramps.

The tank-launched Leguan slides along the unassembled bridge over the pontoons, on which the bridge is then fixed firmly.

Leguan bridge layer deployed as ferry offers maximum manoeuvrability in shallow waters due to its integrated water jet drives. The ferry system can be driven above hydraulically operated ramps that are connected at the ends of the bridge.

The bridge layer comes with a number of optional systems such as lateral railing equipment and central covering panels MLC 12 for using the system for disaster relief. It can also be fitted with a measuring device for detecting capacity overloads.

The fully automatic laying system aboard Leguan allows the operator to lay the 14m bridge within five minutes, and 26m bridge in six minutes.

The Leguan bridge layer system takes about eight minutes and seven minutes to roll back the 26m bridge and 14m bridge respectively.

The LEOPARD 2 mounted with Leguan bridge layer has a longitudinal tilt of ± 10%, and transverse tilt of ± 5%. The slope difference of the bank and longitudinal tilt of the bridge are ± 5% and ± 10% respectively. The level difference of the bridge and laying vehicle is 0.2m. The bridge system has better operation capability even in tricky bank or slope conditions.

The REBS (rapidly emplaced bridge system) is a light dry-gap bridge developed by the General Dynamics European Land Systems (GDELS) for the US Army.