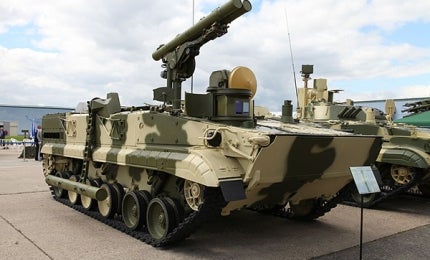 The Khrizantema-S ATGW is designed to detect and destroy the existing and future main battle tanks (MBTs), armoured tanks, low-flying aerial targets, lightweight surface targets, and field fortifications, including steel shelters and bunkers, in both day and at night under all weather conditions. It offers high-rate of fire and is protected against electronic countermeasures.

In November 2012, the Russian Armed Forces’ Southern Military District artillery units in the Republic of Ingushetia received ten Khrizantema-S weapon systems for the replacement of Shturm-S anti-tank missile systems. The artillery units took delivery of an additional three systems in 2013.

"The Khrizantema-S missile system was demonstrated to the UAE Ministry of Defence during the IDEX 2015 International Defence Exhibition & Conference."

The Khrizantema-S missile system was demonstrated to the UAE Ministry of Defence during the IDEX 2015 International Defence Exhibition & Conference. A full-scale sample machine ATGW mounted on a 9P157-3 platoon commander’s combat vehicle took part in the Russia Arms Expo 2015 exhibition held in Moscow.

The Khrizantema-S system features 9M123 and 9M123F supersonic anti-tank guided missiles with a firing range between 400m and 6,000m and an altitude of 3km above sea level.

The 9K123 Khrizantema-S ATGW is mounted on a 9P157 combat vehicle that uses assemblies and units of the BMP-3 infantry fighting vehicle (IFV). It accommodates two crew members and is integrated with a radar control system (RCS) and an optical and laser control system.

The new Kurganets-25 (Object 695) fully-amphibious infantry fighting vehicle (IFV) was unveiled at the Moscow Victory Day Parade in May 2015.

Up to 15 9M123 and 9M123F missiles can be carried on each of 9P157, 9P157-2 and 9P157-3 vehicles, with a launch rate of four missiles a minute. The missiles are automatically loaded into a retractable launcher, thereby enabling simultaneous launch of two missiles at two different targets.

The combat vehicle can travel at a speed of 70km/h.

Featuring K5350 box body, the 9V990 MTS uses 9V981 test equipment to check the parameters of 15 missiles an hour. It has one driver and one operator, and has an operating time of eight hours.

The 9V945 MTS, based on a KamAZ 5350 type truck, is intended for maintenance of the 9P157 combat vehicle. It features К5350 box body and uses 9V991 test equipment. The MTS has two crew members including a driver and an operator, and has an operating time of eight hours.