Expand
The J8 Atlas Xtreme Terrain Robot (XTR) was unveiled in May.
A J8 Atlas XTR being tested by the US Army Rapid Equipping Force (REF).
The J8 Atlas can detect and avoid obstacles during pre-defined missions.
The maximum payload capacity of the UGV is 570kg. 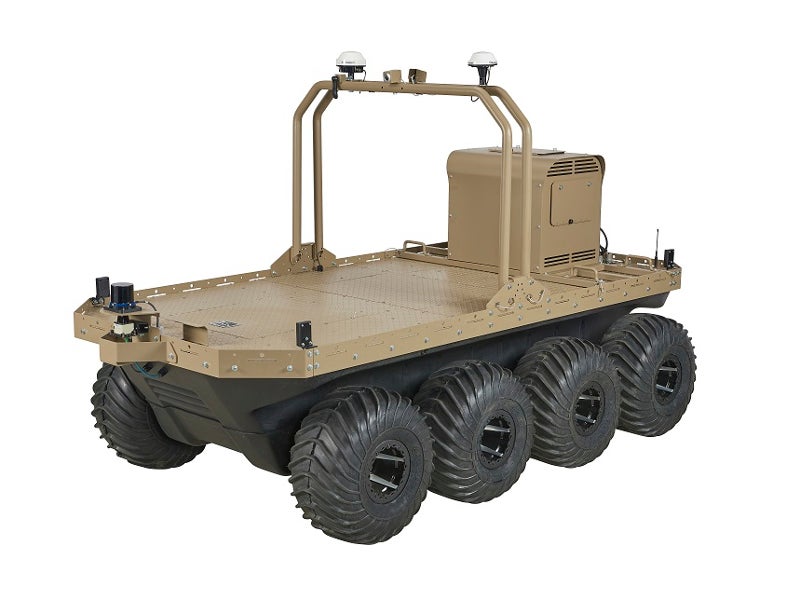 The J8 Atlas Xtreme Terrain Robot (XTR) is a new unmanned ground vehicle (UGV) developed by ARGO’s Space, Robotics and Defence Division, a part of Ontario Drive & Gear (ODG). The unmanned robot is intended for use in defence, disaster relief and rescue missions.

The J8 Atlas XTR was unveiled by ARGO in May. ARGO was awarded a $1m contract by the Defence Research and Development Canada for three J8 Atlas XTR platforms in March.

The US Army Rapid Equipping Force (REF) also received a number of vehicles, which are currently being evaluated at the Muscatatuck Urban Training Centre (MUTC) in Butlerville.

The J8 Atlas XTR is an electric, eight-wheeled, amphibious, all-terrain mobile UGV. It is designed to operate in harmful and extreme environments, with an aim to protect the lives of soldiers. The modular design of the XTR allows for the integration of mission-specific payloads.

The vehicle is fitted with a standard 2in towing receiver with a maximum towing capacity of 680kg. It is also delivered with an on-board charger and generator, according to customer-specific requirements.

The UGV has a length of 2.95m, width of 1.55m and ground clearance of 24cm. The base weight and maximum payload capacity of the vehicle are 750kg and 570kg respectively.

The J8 robot is remotely controlled by a rugged hand-held controller using intuitive and user-friendly controls. The operator can navigate the UGV via remote tele-operation or line-of-sight radio frequency (RF).

"The unmanned robot is intended for use in defence, disaster relief and rescue missions."

The fully autonomous vehicle is also capable of detecting and avoiding obstacles during pre-defined missions in both GPS-enabled and denied environments. The unique ‘follow me’ mode further enables the vehicle to follow the operator for autonomous operation.

The vehicle is equipped with an electric motor-driven propulsion system powered by rapid interchangeable LiFePO4 48V / 100Ah lithium ion battery packs. The power-plant is coupled to an innovative two-speed transmission. The vehicle has a maximum speed exceeding 30km/h and a typical working speed of up to 10km/h.

The UGV features 25in ARGO bead-lock wheels and tyres and can be optionally fitted with an over wheel track system. The fail-safe magnetic brakes in combination with durable running gear offer optimum safety during challenging missions.

The J8 XTR can safely traverse through difficult terrains in extreme weather conditions while carrying payloads of up to 600kg on land and 300kg on water. It has the capability to ascend, descend and negotiate up to 40° inclines. The vehicle can operate in extreme temperatures ranging between -20°C and 40°C.

The fully-amphibious capability of the vehicle allows it to float and swim across the surface of water under its own propulsion. The vehicle has a maximum speed of 5km/h in water.

Kidde Aerospace & Defense
Kidde was founded in 1917 and has long been associated...
SUBSCRIBED