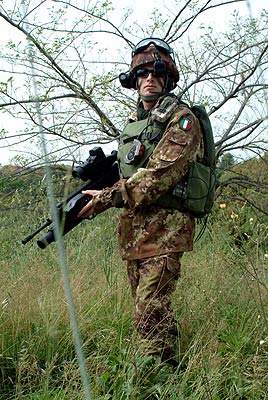 An industrial team is developing the Italian Soldato Futuro system. 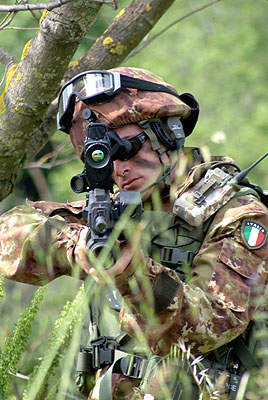 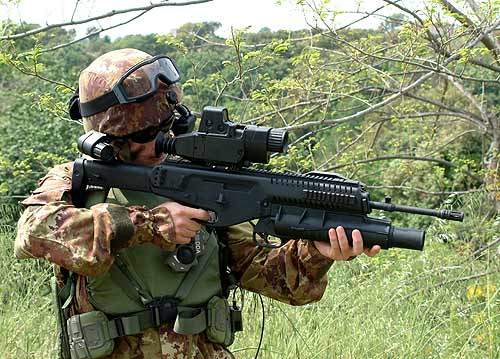 Beretta is developing a lightweight rifle for the Soldato Futuro System. 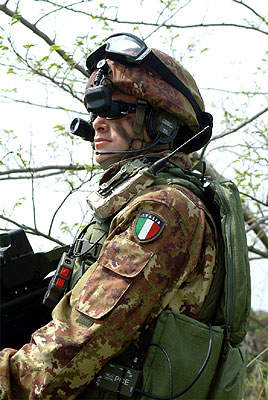 The Soldato Futuro helmet has a splinter- and bullet-proof visor. 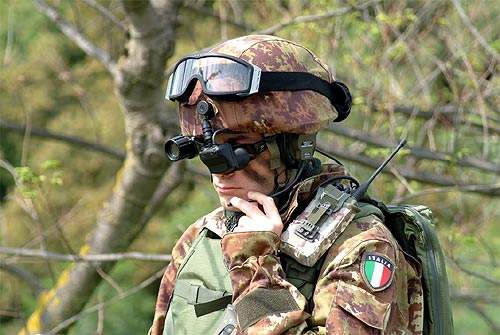 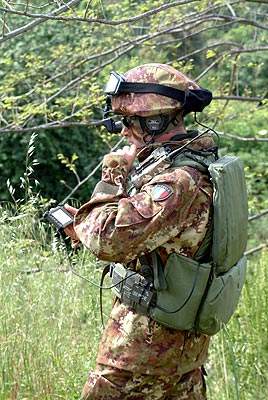 The Soldato Futuro has a touch screen for sending and receiving orders. 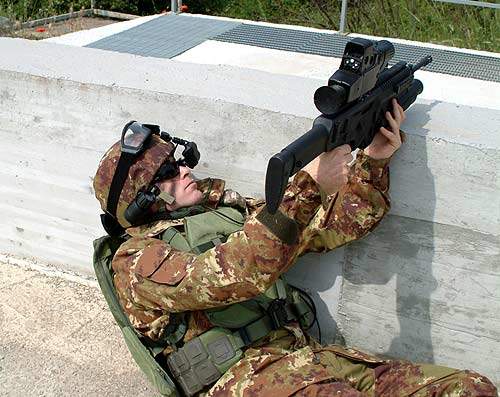 The Soldato Futuro rifle is fitted with an individual combat weapon sight, which includes optical, TV and infrared channels. 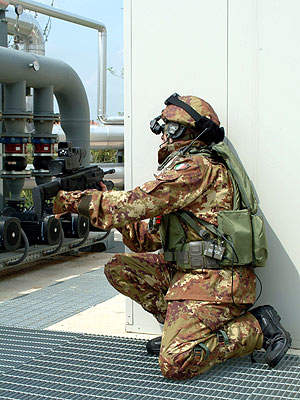 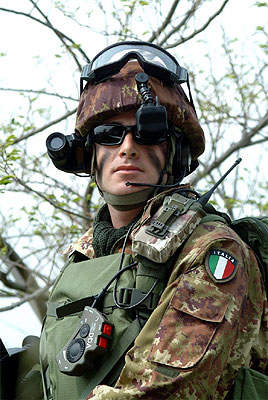 A collaborative programme between Germany and Italy was cancelled because there was a difference in requirements, scope and in timing of the countries’ soldier modernisation plans.

The ending of the collaborative programme led to the Italian Ministry of Defence initiating a national programme and the formation of the industrial team led by Selex Communications.

The armed forces are working closely with the industrial partners, particularly in the evaluation of technology demonstrators and prototypes.

The Nato Army Armament Group (NAAG) has established the Topical Group 1 (TG/1) to coordinate soldier system interoperability and to prevent unnecessary duplication between various nations’ soldier systems. Italy is officially represented in the TG/1 group and takes into account the need for standardisation of protocols for symbols such as on tactical displays, messages between terminals, and connectors and power packs.

Sistemi Compositi led the development of the helmet, clothing and protection system. The combined combat vest and universal support module, developed by Sistema Compositi and Selex Communications, includes cables for the integration of the electrical components worn and carried by the Soldato Futuro.

A new disruptive pattern material has been designed for temperate and desert environment versions of the combat uniform.

The soldier will also have a camouflage version of the nuclear, biological and chemical protection suit.

The helmet has two visors, a splinter-proof visor and a bullet-proof visor, and a laser protection goggles. Various configurations are being considered to integrate the Aero Sekur nuclear, biological and chemical warfare protection face mask. The helmet also features Helmet-Mounted Display (HMD) equipment that displays information from a Low Level TV camera mounted on the back of the helmet. It also features Night Mobility Subsystem (NIMOS) developed by Selex Galileo.

The soldier wears a touch screen for sending and receiving orders and information in the form of both text messages and graphic / image messages and displaying tactical situations, navigation data, global positioning system data over digital maps. The touch screen is wire linked to a pocket-sized computer that uses a standard man machine interface (MMI).

The unit commander and second in command will be issued with a larger touch screen, giving a higher-resolution image of maps and data.

The earphone and microphone being developed by Larimar includes a Galileo Avionica physiological sensor which will allow the commander of the infantry section to monitor each soldier’s health conditions through its command and control system. The wireless links have been reduced to decrease electromagnetic signature and jamming problems.

In addition to the IPR, the commander of the infantry section has a higher level radio with longer range for voice and data communication with the section’s platoon command post. The commander can use both radios while sharing the same earphone and microphone.

Communications design was addressed in order to ensure the Soldato Futuro system is fit for future operation, according to the emerging network-centric doctrine.

The commander and second in command in an infantry section have a Galileo Avionica binocular target acquisition unit, (UAB), with a day channel and night-time thermal channel, a laser rangefinder and built-in compass.

The soldiers are issued with a Galileo Avionica individual night-vision unit based on a TV camera, on which most significant command and control can also be displayed for prompt alert.

In March 2009, the Italian Army recieved a new assault rifle, the Beretta ARX-160, to equip the Soldato Futuro ensemble. The ARX 160 will operate on gas and has a rotating bolt with seven lugs.

Beretta developed an ergonomically designed, lightweight rifle for the Soldato Futuro system. The length of the new rifle with the butt fully extended is 840mm, which is 158mm shorter than the Beretta AR 70/90.The telescopic butt can be adjusted to four different positions to suit the individual soldier’s build and situation.

The rifle is fitted with a Picatinny rail and an individual combat weapon sight, developed by Galileo Avionica.

"The Soldato Futuro system includes a touch screen for sending and receiving orders and information."

The visible laser pointer corresponds to the bullet impact point and is particularly useful for close range combat in daylight conditions.

An infrared laser pointer produces a near infrared spot which is visible through infrared or night vision goggles and is deployed in night-time close combat.

The red dot sight places a red dot on the image of the target inside the sight. The red dot is not projected onto the real target, which would provide a visual warning to that target. The view through a soldier’s sight can be distributed to other members of the infantry section via the radio link. Its firing tests after immersion in salt water and other such conditions were successful.

The rifle can be fitted with an under-barrel grenade launcher. One or two grenade launchers will be deployed in each infantry unit. The grenade launcher fire control system, developed by Galileo Avionica, includes a computer and a Class 1 laser rangefinder.

In February 2009, the Italian Army recieved its first Freccia 8×8 wheeled armoured infantry fighting vehicle (AIFV), as part of the Soldato Futuro programme. The Italian Army Freccia is a 28t vehicle, powered by an Iveco 8262 diesel engine. It can reach speeds of up to 105km/h. The vehicle features a Rheinmetall 25mm cannon and an OTO Melara Hitfist Plus turret.

The turrent is fitted with communication radios. The Future Soldato radios for the infantry regiment include a VHF SINCGARS radio, a wide-band HCDR (high-capacity data radio), a CNR 2000 HF radio, the 900MHz vehicular integrated soldier system radio (ViSSR) and the 2.4GHz Wi-Fi radio.

The vehicles for the company officer in command and the company second in command are equipped with a UHF Have Quick radio that allows communication between fixed and rotary wing aircraft. These vehicles will become a part of the "Pinerolo" brigade, the first Italian Army medium brigade. The Italian army has 54 Freccia vehicles on order.