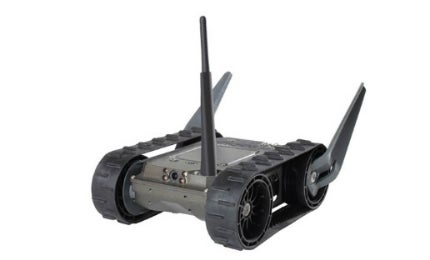 iRobot 110 First Look is a small, lightweight and throwable unmanned ground vehicle manufactured by American robot maker, iRobot. It is intended to meet the mission needs of infantry and special operations forces.

Pre-production prototypes of the 110 FirstLook robot were unveiled in April 2011. iRobot received a $1.5m order from the Joint Improvised Explosive Device Defeat Organization (JIEDDO) for the supply of more than 100 FirstLook unmanned ground vehicles in March 2012.

The US Navy placed a $4m order for an undisclosed number of iRobot 110 FirstLook robots and accessories in August 2015, for scheduled completion of deliveries in  2016.

It can also be used to locate and identify hazards in confined areas and close-in scenarios, and is capable of operating in visual obscurants under all weather conditions.

In addition, the robot can be equipped with a small lightweight manipulator (SLM) to manipulate and lift objects weighing up to 3.5lb (1.58kg). The SLM incorporates a manipulator and a mast camera with illuminator.

An integrated deployment and camera (IDAC) can be attached to provide improved situational awareness through its integrated features such as 270° adjustable mast camera angle, visible light illumination and three motorised pins.

The built-in 2.4GHz or 4.9GHz iRobot mesh radio facilitates reliable communication between the operator and the robot through multiple paths. The robot also uses a digital radio, a modular interface, and a line of sight communication system with a range of 200m.

The rugged, water-resistant, rechargeable iRobot uPoint multi-robot control system with a built-in radio enables the operator to perform command and control of the robot from stand-off distances. The control system weighs 2lb (0.9kg) and features an easy-to-use LCD touchscreen for displaying the real-time imagery and video captured by built-in cameras.

The iRobot 110 FirstLook robot is fitted with rotating flippers, allowing it to climb obstacles of up to 7in, turn in place, and self-right when flipped over. Its tracked propulsion with skid steering and zero radius turn offers high mobility.

The unmanned ground vehicle has an endurance of more than six hours and can reach speeds up to 5.5km/h. It can sustain 16ft drops onto concrete and can be submersed to a depth of 3.3ft. The robot is operable in temperatures ranging between -20°C and 55°C.

US Defence Sector – Market Opportunity and Entry Strategy, Analyses and Forecasts to 2015

Detailed analysis and forecasts of the US defence market are available from our business information platform Strategic Defence Intelligence.