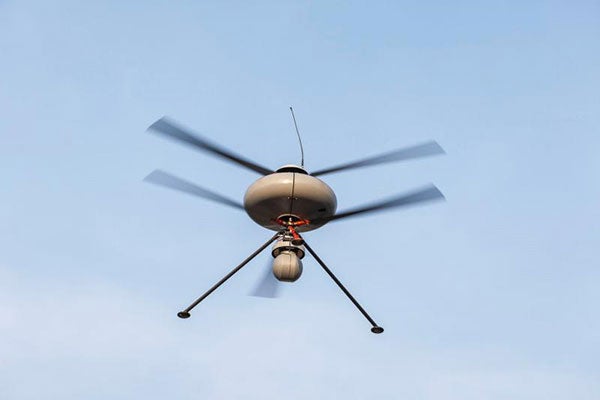 It has been in service with the French Army since 2012.

With the ability to locate, identify and track hostile threats and offending operators, the system provides warfighters with high survivability and improved situational awareness on the battlefield.

The VTOL UAV was displayed during SITDEF 2015 exhibition in Bangkok in November 2015. It was presented to foreign law enforcement agencies in October 2015 in France.

"The UAV is intended to perform missions such as intelligence, surveillance, target acquisition and reconnaissance (ISTAR), as well as search and rescue."

IT180-3EL-I is based on IT180 mini UAV developed by Infotron, which was acquired by ECA Group, a subsidiary of France-based Gorgé Group engaged in the design and manufacture of UAVs in April 2014.

The mini VTOL UAV, designed according to military standards, is equipped with a patented three-blade contra-rotating rotors with a rotor diameter of 1.8m. It has a total mass of 21kg when unloaded.

The drone can be integrated with payloads of up to 3kg on the top and/or beneath. It is easy to use and can be deployed in less than six minutes. It features autonomous take-off and landing capabilities, and has the ability to perform missions using an autopilot.

The drone is equipped with a gyro-stabilised, pan/tilt/zoom electro-optical / infrared (EO/IR) video camera for capturing high-resolution imagery and video in both day and night conditions.

The EO/IR camera has capabilities such as geo-location, geo-tracking, target acquisition and laser pointer, as well as continuous 360° pan or tilt rotation.

In day mode, the camera produces images with a resolution of 820px x 530px using 36x zoom lens. It can detect, recognise and identify human threats at distances of up to 1km, 600m and 300m respectively.

In night mode, the camera can detect, recognise and identify objects at ranges of 800m, 150m and 70m respectively using 8x zoom lens.

The VTOL UAV and its payloads are operated manually by personnel from the associated ground control station (GCS) using a joystick. The GCS transmits mission planning and command and control signals to the UAV through the data link.

Propulsion and performance of IT180-3EL-I UAV

Powered by a two-stroke, 46cm³ brushless DC electrical engine, the IT180-3EL-I mini UAV can attain a maximum speed of 80km/h. The engine offers endurance of up to 50 minutes in flight mode and ten minutes of flight time in perch mode.

The UAV can fly at a maximum altitude of 3,000m and withstand wind speeds of 60km/h. It has a data link range of up to 10km. Its flexible architecture provides increased stability under extremely harsh weather conditions. The noise level of the IT180-3EL-I is 44dBA at 100m above ground level.

This project forms part of our recent analysis and forecasts of the global unmanned aerial vehicles (UAV) market available from our business information platform Strategic Defence Intelligence. For more information click here or contact us at EMEA: +44 20 7936 6783; Americas: +1 415 439 4914; Asia Pacific: +61 2 9947 9709 or via email.