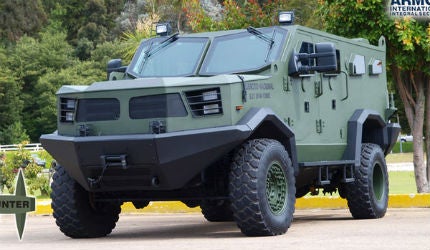 Hunter TR-12 is a 4×4 wheeled multi-purpose tactical armoured personnel carrier (APC) designed and manufactured by Armor International for the Colombian Army. The APC is designed to transport troops to difficult-to-access destinations. It was unveiled at the Worldwide Exhibition of Internal State Security Milipol in Paris, France, in 2011.

The Hunter TR-12 APC entered into service in 2012. Two TR-12 APCs are currently in service with the Colombian Army as mine resistant ambush protected (MRAP) vehicles.

The Hunter TR-12 tactical APC is produced in three models, which include Hunter 1, Hunter 2 and Hunter 3. It can be configured for use in other configurations such as armoured command, armoured ambulance, and armoured vehicle for special operations. It can also be used for logistics and freight transport.

The first 4×4 Hunter TR-12 vehicle of MRAP type was delivered to the Colombian Army in December 2012 and the second was delivered in July 2013.

The Hunter TR-12 APC features a mono-hull design mounted on an independent chassis. It has spacious interiors to accommodate 12 passengers including two crew and 10 equipped soldiers comfortably. The curb weight of the vehicle less than 20,000lbs.

Tactical lights are fitted in the vehicle for night time operations. Blackout lights, snorkel and winch can be fitted optionally.

The Hunter TR-12 tactical APC is mounted with a small open 360° roof turret. A single hatch is mounted on the top of the crew compartment at the front of the vehicle.

The vehicle is optionally fitted with a remote controlled weapons system. A 7.62mm or 12.7mm machine gun can be fitted on single ring mount of the vehicle.

The vehicle offers B6 Standard EN 1063 protection level. It features double shielding floor and V-shaped mine shield, and provides superior protection against guns and rifles. It can survive in high-risk areas prone to clashes and ambushes.

"The 4×4 wheel drive action allows the APC to reach remote and dangerous places."

The 4×4 wheel drive action allows the APC to reach remote and dangerous places.

Engine and mobility of Hunter TR-12

The 4×4 Hunter TR-12 tactical APC is powered by a turbo diesel engine featuring V8 cylinders. The 6,700cc engine allows the vehicle to perform operations in difficult terrains. The turbo diesel engine is coupled to an automatic transmission system with one reverse and six speed gears. The engine develops a torque of 660lb-ft at 1,600rpm and 300hp at 2,800rpm.

The Hunter TR-12 is a reliable vehicle for long distances and is equipped with a set of five 335/80 R20 tyres. The double fuel tank has the capacity to store up to 260l of diesel.

The vehicle is controlled by vented disc brakes in the front and rear, and a power four-wheel disc with anti-lock braking system (ABS).

The Armoured Multipurpose Vehicle (AMPV) is a family of 4×4 vehicles being developed jointly by Krauss-Maffei Wegmann (KMW) and Rheinmetall Defence.

Dzik is a multirole infantry mobility vehicle manufactured by AMZ-KUTNO. It can be deployed as an armoured personnel carrier in patrol and intervention operations by military and police forces.