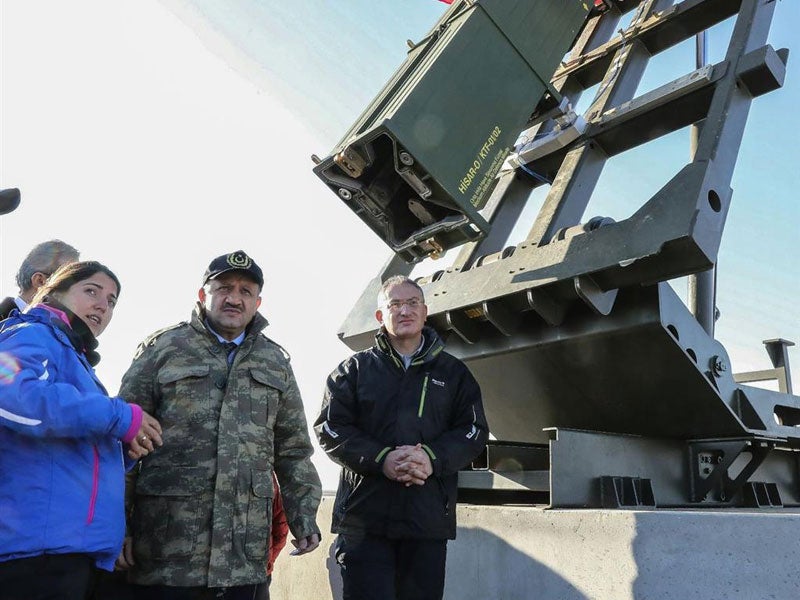 It can defend airborne threats such as combat aircraft, cruise missiles, helicopters, and unmanned aerial vehicles.

Turkish Undersecretariat for Defence Industries (SSM) awarded a contract to ASELSAN and Roketsan in June 2011 to design and develop the HİSAR low and medium-altitude air defence missile systems indigenously.

Roketsan, a weapons manufacturer based in Turkey, is responsible for the development of the HİSAR-O surface-to-air missile (SAM).
The first flight test of the HİSAR-O missile system was performed in July 2014. Low-altitude version of the HİSAR-O air defence missile system, designated as HİSAR-A, is expected to enter service with the Turkish Armed Forces in 2020.

The missile launching system is based on a Mercedes-Benz 6×6 military truck chassis and can hold up to six ready-to-fire HİSAR-O air defence missiles.

The missile features modular design and can be vertically launched. It can perform missions autonomously using a medium-altitude 3D search radar or operate as part of a battery using a fire control unit.

Warhead and guidance of HİSAR-O missile

The HİSAR-O medium-altitude SAM uses a high explosive fragmentation warhead, which can be fitted with impact and proximity fuses to effectively destroy airborne targets flying at medium altitudes.

The weapon is guided by an inertial navigation system (INS) through a radio frequency (RF) data link in the midcourse phase of flight.
Guidance for the missile in the terminal phase of flight is provided by an imaging infrared seeker (IIR).

The fire control unit provides command and control and fire control for the HİSAR-O air defence missile from battery command posts through a Link 16 data link.

Powered by a dual pulse solid propellant rocket motor, the HİSAR-O air defence missile can engage targets up to a distance of 25km at sea level. The missile can fly at a maximum altitude of 10km.

The weapon is equipped with a thrust vectoring system and a hybrid control system, which provide increased manoeuvrability at medium altitudes.