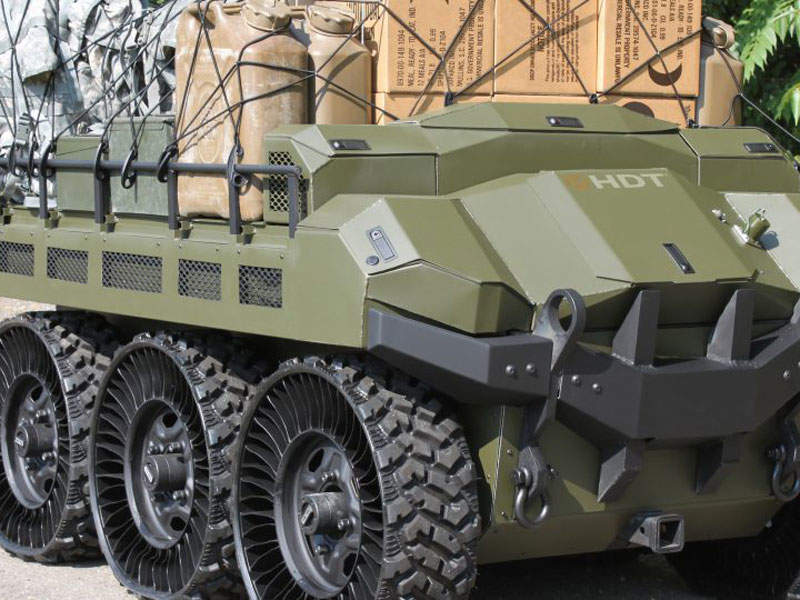 Hunter WOLF will improve the combat-readiness and mobility of the soldiers. Image courtesy of Staff Sgt. Jason Hull.

The UGV can be mounted with a remotely-controlled weapon station.

Hunter WOLF (Wheeled Offload Logistics Follower) is an unmanned ground vehicle (UGV) developed by HDT Global to meet the logistics requirements of the US Army. The UGV was unveiled by HDT Global during the 2017 AUSA Annual Meeting & Exposition held in October.

The development of Hunter WOLF began in 2012 with the intention of meeting the requirements of the US Army Squad Mission Equipment Transport (SMET) programme. The SMET is aimed at the acquisition of a UGV with the capability to carry a squad of soldier gear for a standard 72-hour mission.

The UGV was extensively evaluated by the US Army, Marine Corps, and Special Operations Command (SOCOM) during trials, and prototypes were granted various safety releases by the Army Test and Evaluation Command.

The Hunter WOLF is a 6×6 vehicle with engine in the front and a flatbed cargo compartment extending from the centre to rear section of the hull. The modular architecture of the vehicle allows for the integration of a range of mission kits.

The Hunter WOLF can carry a maximum payload of up to 450kg. It can be mounted with tools and payloads such as a route clearance flail and mine roller, a lightweight expeditionary bridge, a backhoe/loader kit, dual stretcher mounts for casualty evacuation (CASEVAC) and a follow-me kit with the capability of operating in Global Positioning System (GPS)-denied environments.

The vehicle can also carry intelligence, surveillance and reconnaissance (ISR), as well as communications relay payloads.

The vehicle can be optionally fitted with armour kits for protection against up to 12.7mm projectiles.

The vehicle is equipped with a JP-8/electric hybrid powertrain developing a peak power output of 130hp. The propulsion provides silent drive and silent watch capabilities to the vehicle. The generator can produce 20kW of power to recharge drive batteries, while the vehicle can supply 3kW power to a small base camp when stationary, and 1kW of power when moving.

“The Hunter WOLF is a 6×6 vehicle with engine in the front and a flatbed cargo compartment extending from the centre to rear section of the hull.”

The UGV is operated by a hand-held wireless pistol-grip remote with thumb controller. The running gear of Hunter WOLF includes three electrically driven tireless wheels (tweels) on either side of the hull. The tweel system provides more durability and higher speed than pneumatic wheels and tracks respectively.

The vehicle has a turning diameter of 3m and is capable of operating through narrow paths, steep slopes and dense forests. It delivers superior performance in extreme environments.

The vehicle runs at a maximum speed of 32km/h and can be towed at a speed of 80km/h using a standard military tow bar. It has an unfuelled range of 100km and maximum endurance of 72 hours. It can negotiate gradient and side slopes of 30° and ford a maximum depth of 60cm.

The Hunter WOLF UGV can be air-ported by UH-60 as an internal or slung load, while a CH-47 / V-22 can carry up to six vehicles internally.