Manufactured by Ghost Robotics, a developer of quadrupedal robotic solutions based in the US, the all-weather UGV serves as a robotic dog, based on the bio-mechanics of a dog.

The V60 robotic dog can be used in unstructured urban and natural terrains.

The US Air Force’s Tyndall Air Force Base received the robotic dogs for integration into the 325th Security Forces Squadron in March 2022. The unmanned ground systems are used for security and patrolling operations at the base.

The V60 Quadruped is in trials with the US Homeland Security to assist in patrolling the country’s southern border.

The robotic dog was tested in use-case exercises to assess its capabilities in realistic scenarios. It is also being tested by the Future Capability Group (FCG) of Defence Equipment & Support (DE&S), part of the UK Ministry of Defence (MOD) and the UK Army.

Soldiers from the 23 Parachute Engineer Regiment in collaboration with experts from the DE&S Expeditionary Robotics Centre of Expertise (ERCoE) are evaluating the potential use cases of the unmanned system for the frontline commands of the army.

The testing campaign is assessing the feasibility of the robotic dog for applications such as delivering mission-critical supplies, scoping out hazardous areas, or performing combat tasks.

The Australian Army used a brain-computer interface to control the Ghost Robotics quadruped robot during a demonstration at the Majura Training Area in Canberra, Australia, in May 2022. The technology allows the operator to control the robotic dog using brainwaves detected by a biosensor placed at the back of his/her head.

The Ghost Robotics V60 UGV has a rugged design, which enables it to quickly adapt to new environments using a blind-mode control core. The legs and arms of the system can be interchanged.

The UGV weighs 51kg and can carry payloads weighing up to 10kg. The system can be assembled and disassembled within 15 minutes.

The V60 Quadruped is controlled by an operator using a control pad, which looks like a gaming controller.

It can operate in unknown environments and return to position even when the vision sensors fail and the robot fails or slips.

The Ghost V60 quadruped is expected to provide enhanced situational awareness for ground-based forces. It is also expected to be deployed to support frontline soldiers, acting as the eyes and ears for them.

The four-legged robot can traverse different types of terrains including rocks, sand and hills, as well as stairs. It can walk, run, crawl, climb and swim in complex environments.

The Ghost SDK allows customers to customise the behaviours and autonomy applications of the V60.

Ghost Mobile, an Android mobile application, can be used either on a stand-alone basis or with joystick controller add-on. It enables mission control and record-playback automation, and diagnostics, video and sensor management.

The unmanned system can be equipped with red, green, blue (RGB) and time-of-flight (TOF) sensors for surround-sensing, and thermal/infrared (IR) sensors. It can also be fitted with CBRN and speciality sensing kits.

The integration of light detection and ranging (LIDAR) imaging systems enables the user to obtain 3D imaging of the surrounding environment to assess potential threats.

Cameras are fitted on the front, rear and sides, offering 360° views and enhancing the situational awareness, which is important for users to plan effective strategies.

The computing system integrated on the robotic dog is the NVIDIA® Xavier CPU/GPU. It is integrated with the mainboard, radios, gigabit ethernet (GigE) switch, global navigation satellite system (GNSS), and other electronics.

The Ghost Robotics V60 Quadruped can cover about 10km on a single charge. It provides an endurance of 21 hours in standby mode, between eight and ten hours in mixed use, and up to four hours while in continuous operation.

The system can achieve a top speed of 3m/s and operate at temperatures ranging between -40°C and 55°C. 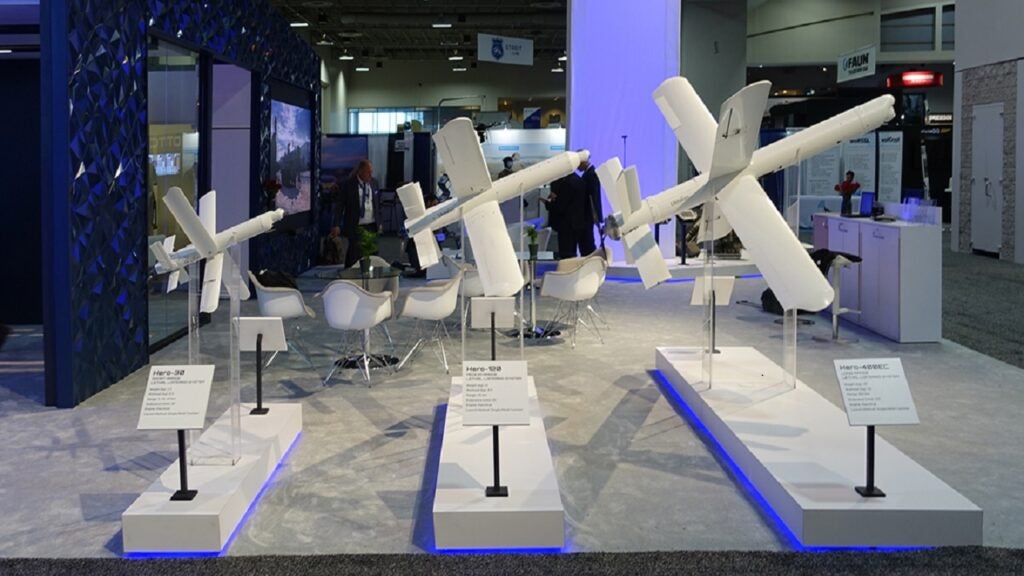 Hero Family of Loitering Munition Systems
Topics in this article: