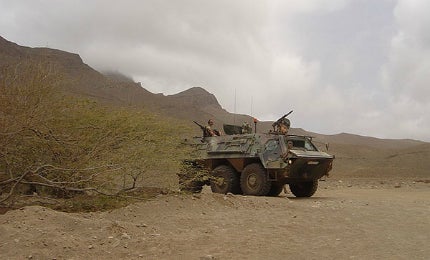 The Fuchs (Fox) 2 NBC-RS is a chemical, biological, radiological and nuclear (CBRN) reconnaissance vehicle developed by Rheinmetall MAN Military Vehicles (RMMV), which is a joint venture between Rheinmetall and MAN Truck & Bus.

The vehicle is equipped with automatic detection systems and sensors for detecting nuclear radiation as well as CBRN agents and other toxic substances.

Orders and deliveries of Fuchs 2 NBC-RS

The Armoured Multipurpose Vehicle (AMPV) is a family of 4×4 vehicles being developed jointly by Krauss-Maffei Wegmann (KMW) and Rheinmetall Defence.

RMMV received an order from the United Arab Emirates for 32 Fuchs 2 NBC-RS vehicles in February 2005. The first vehicle was handed over to the Chemical Corps of the UAE Armed Forces in February 2007. RMMV delivered the final batch of 32 vehicles to the UAE in early 2011.

The Emirate of Kuwait placed a contract with Rheinmetall for the supply of 12 state-of-the-art Fuchs 2 NBC-RS vehicles, in July 2015. Deliveries of the same are scheduled to begin in 2017. The contract also includes technical support package covering training, service and spare parts for a period of five years.

The Fuchs 2 NBC-RS is based on the Fuchs 2 wheeled vehicle. The all-welded steel hull can accommodate four crew including a driver, a commander / gunner, and two reconnaissance personnel. Entry and exit are provided through a door on each side of the forward hull and a door at the rear.

Maximum combat weight of the vehicle is 20,000kg, whereas the maximum speed is 100km/h.

NBC systems aboard the Fuchs 2 NBC-RS

The Fuchs 2 NBC-RS vehicle incorporates a comprehensive, fully-integrated suite of devices for identifying NBC warfare agents and other hazardous materials.

The double-wheel sampling system includes two silicone-coated wheels for the automatic detection of NBC warfare agents and harmful materials on the ground.

A stand-off infrared detector aboard the vehicle can detect volatile chemical substances in the air from a long distance.

The NBC tail at the rear of the hull houses a tube magazine for carrying samples, the marker trap, glove opening and forceps for manual sampling.

Also fitted to the vehicle is a central computer system. It also transmits all relevant NBC data to the other vehicles and headquarters via the Fuchs command post system and can mark the contaminated areas and warn the friendly units and civilians to avoid the risk of contamination.

“The Fuchs 2 NBC-RS vehicle incorporates a comprehensive, fully-integrated suite of devices for identifying NBC warfare agents and other hazardous materials.”

The vehicle is fitted with FLW 200 remotely-controllable weapon station (RCWS), which can be operated from inside the vehicle. The RCWS can be armed with a 12.7mm M2 machine gun or a 40mm automatic grenade launcher.

Protects for occupants from 7.62mm armour piercing rounds is provided by the armoured steel. The protection level can be further increased to guard against 12.7mm/14.5mm armour-piercing rounds, artillery fragments and mines.

The fully-amphibious vehicle is propelled in water by two Schottel propellers on either side of the hull at the rear. The propellers can be traversed through 360° to offer high-manoeuvrability during amphibious operations. It is possible for the vehicle to sail in water at a maximum speed of 10km/h.

A central tyre pressure-regulation system is optionally fitted to the vehicle for high-mobility on difficult terrains. The run flat inserts further ensure mobility in the event of tyre damages.