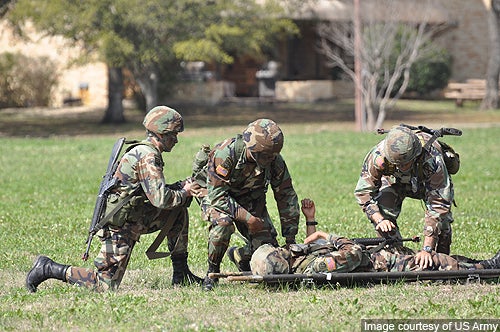 Fort Sam Houston is a US Army base located in San Antonio, Texas. The army post is named after Sam Houston, the first President of the Republic of Texas, an independent state, from 1836 and 1846. Fort Sam is the largest military medical training facility in the world and also the headquarters of the US Army Medical Command (MEDCOM).

The base serves as the command headquarters of the US Army North and the US Army South. It also administers the US Navy Regional Recruiting, Fifth Recruiting Brigade and Bethesda Detachment. The base also houses the US Naval School of Health Sciences, the San Antonio Military Entrance and Processing Station, and the Army Medical Department (AMEDD) Center and School.

The facilities at the Medical Education and Training Campus (METC) at the Fort Sam base were expanded recently to consolidate the enlisted medical training services of the army, air force and navy.

The joint campus is the first and largest of its kind in the history of the Department of Defense.

Led by tri-service leadership, construction of the campus was started in July 2008 and completed in September 2011.

“The joint campus is the first and largest of its kind in the history of the Department of Defense.”

The US Army had been based in the City of San Antonio and Alamo City since 1845. Fort Sam was established in 1876 with the construction of a Quadrangle in a 92-acre site. Fort Sam served as the headquarters, garrison, medical support, training, logistics and mobilisation base. It was subsequently expanded with construction of additional facilities and is now spread over an area of about 3,000 acres.

The headquarters of Fort Sam controlled 25% of the army forces before the American Civil War of 1865. It was also the largest army installation in the continental United States between 1910 and 1945. Military aviation training began at the base in 1910. In 1911, effective Command Post Exercises (CPX) were conducted at the base alongside large-scale troop manoeuvres. By the 1930s, Triangular Division was developed through field exercises.

By 1917, Fort Sam witnessed the air evacuation of casualties. It became the principal US Army medical training facility and Brooke General Hospital was developed at the base after the World War II.

In 1975 Fort Sam was recognised as a National Historic Landmark (NHL) and added to the National Register of Historic Places (NRHP) list. The base has about 900 historic buildings and preserves a huge collection of military structures.

As part of the Base Realignment and Closure (BRAC) legislation made by the US federal government in 2005, Fort Sam is undergoing renovations or building of 78 major facilities. The $1bn San Antonio BRAC construction programme will have a total development area of about six million square feet.

“Led by tri-service leadership, construction of the campus was started in July 2008 and completed in September 2011.”

In August 2009, the US Army Corps of Engineers awarded a $118.7m contract to Hensel Phelps Construction for building two barracks at Fort Sam Houston. The barracks are used by the military personnel being trained at the METC. With a total area of 558,000ft², the barracks accommodate 1,800 medical trainees at the base. Three dormitories were also built as part of the METC, which accommodate 3,600 Navy and Air Force medical personnel who are also contracted with Hensel Phelps.

The San Antonio BRAC construction programme is being executed by the Joint Program Management Office. The members include Fort Worth District Office of the US Army Corps of Engineers, the Naval Facilities Engineering Command, the Air Force Center for Engineering and the Environment and other private contractors.

The base has also started renovation of the historical buildings for reuse through public-private partnerships. A total of $30m is budgeted annually for construction projects at the base.

The developments will allow consolidation of the enlisted medical training programmes of the US military forces at Fort Sam Houston. The METC will provide medical training in nuclear medicine, combat medics, dental, pharmacy and radiology fields.

In January 2010, a recreational facility was opened at the Benner Barracks, called BOSS Zone. The BOSS Zone has flat screen TVs, movie library, Wii games and a pool table.

The base also has branded hotels from the partnership of InterContinental Hotels Group (IHG) and Actus Lend Lease. They were planned as part of the Privatization of Army Lodging (PAL) programme which started in August 2009 at Fort Sam Houston.