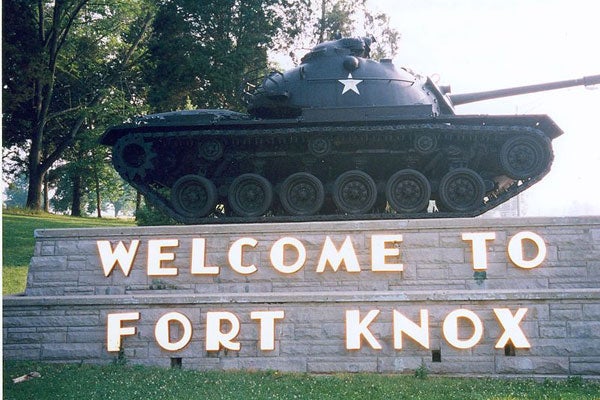 Fort Knox is a US army base located near the city of Radcliff in Kentucky, which is located 15mi (24.14km) north of Elizabethtown and approximately 35mi (56.32km) southwest of Louisville. The base is spread over 109,054 acres (44,134ha) in three Kentucky counties including Bullitt, Hardin and Meade.

The base is named after Henry Knox, who was the Chief of Artillery in the Revolutionary War and the first US Secretary of War.
The Fort Knox base hosts key units such as the Army Human Resources Command, United States Army Cadet Command and the United States Army Accessions Command.

Southland Energy was awarded a contract in May 2014 for the development and implementation of energy improvement projects at Fort Knox for reducing the operation and maintenance costs at the base.

A new Army Wellness Centre (AWC) was opened at the base in October 2014 with the aim of improving the health of the Army community residing at the base.

The army base was established during the First World War in 1918 as a permanent post for the US Army. In January 1932, Fort Knox was made a permanent installation to accommodate the 1st Cavalry Regiment. It also served as an induction centre for Civilian Conservation Corps (CCC) in the 1930s.

Fort Carson is a US military installation situated in the city of Colorado Springs in the state of Colorado, US.

Fort Knox became testing location for the Navy in April 1942 with the establishment of an all-wood mock-up of the Landing Ship Tank (LST) well deck. The Armoured Force was renamed as the Armoured Replacement Training Centre (ARTC) in 1943. Fort Knox was a main prisoners of war (POW) camp from February 1944 to June 1946. The Armour Centre and School from Fort Knox were relocated to Fort Benning as part of the 2005 Base Realignment and Closure (BRAC) recommendations. Under the BARC recommendations, US Army’s Human Resource Centre of Excellence at Fort Knox now stations Human Resources Command, Army Accessions Command and Cadet Command.

Fort Knox base has a total population of about 75,000 including active army personnel, retirees, trainees and civilians.

“The Godman Army Airfield at Ft. Knox has three runways.”

The Godman Army Airfield at Ft. Knox has three runways. The airfield was built in October 1918 and includes A 5,585ft long primary runway and a 5,053ft long secondary runway. The primary and secondary runways can accommodate C130 and C17 military transport aircraft.

Another runway with a length of 2,366ft handles helicopters. The base also includes four helipads.