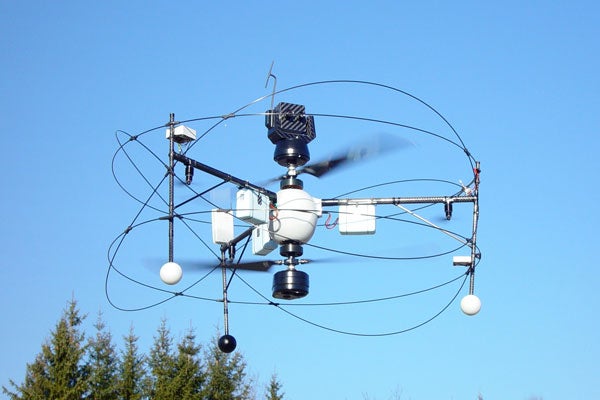 The Fancopter is a micro unmanned aerial vehicle (UAV) designed and manufactured by German company EMT Penzberg for the German armed forces. The UAV performs intelligence, surveillance and reconnaissance (ISR) operations in urban environments in all lighting conditions.

The vehicle has an endurance of up to 25 minutes and offers an observation time of approximately three hours while perching.

The Barracuda demonstrator unmanned air vehicle has been developed by EADS Military Air Systems in Germany and Spain, with an industrial team of about 30 aerospace companies and specialised suppliers.

EMT Penzberg delivered radioactivity sensors to the Federal Office for Radiation Protection and the Federal Police in November 2012 for use in EMT’s UAV systems in civilian protection applications.

Design and features of the Fancopter UAV

The Fancopter micro UAV is easy to use and the entire mission system can be carried in one backpack. The vehicle’s patented configuration ensures low noise emission and allows precise control over the UAV. The UAV has a robust structure and can perform operations at high flight speeds even against high winds. It can conduct ISR operations in open air and buildings.

Navigation of the UAV system

The Fancopter can be additionally fitted with a two-axis tiltable high resolution still camera and a zoom video camera. Other optional systems include chemical sensors, zoom video camera, radioactivity sensors and microphones.

The Fancopter air vehicle is controlled by a compact ground control unit with a built-in video monitor. The data captured by the UAV is recorded in digital form in the ground control station. Other users can access the information through a number of interfaces.

The micro UAV is connected to the control computer through a radio transmission data link for video-transmission and control. It can also be connected with an optical fibre data link to perform special missions.

The video images recorded by the Fancopter ISR system are transmitted in real time to a maximum distance of more than 1km. The system can be monitored by a second observer using an additional monitor or optional video goggles.