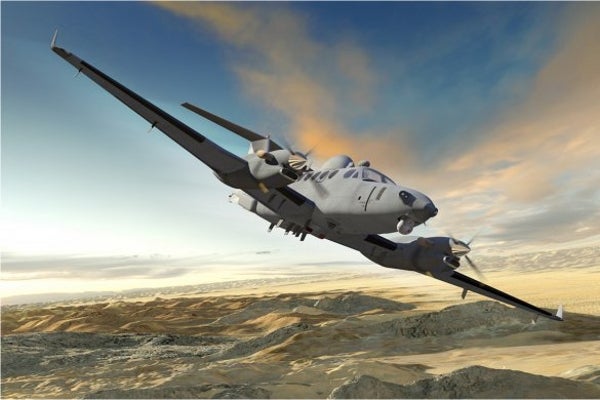 The EMARSS is based on the Hawker Beechcraft King Air 350 commercial aircraft platform. The system offers significant benefits to the armed forces by collecting, analysing and providing real-time intelligence information to war fighters instantly.

The EMARSS can identify, locate, analyse and trace surface targets even in low light. It offers high accuracy and preciseness in all-weather conditions.

EMARSS will be operated by the Aerial Exploitation Battalions (AEB) of the US Army Intelligence and Security Command (INSCOM).

The EMARSS is designed as an open architecture, plug-and-play system, which allows for the integration of a variety of sensors and software according to the mission requirements.

The EMARSS can be customised to install several sensor systems such as electro-optical/infrared cameras and MX-15 full-motion video cameras. It can be installed with a wide area surveillance system to recognise and generate images of a terrain.

Boeing completed the first flight of an EMARSS risk-reduction prototype in October 2012.

A team of Boeing and the US Army successfully completed the maiden flight of the first EMARSS EMD aircraft in May 2013. They evaluated aerodynamic handling qualities, aircraft systems performance, and autopilot functions for more than four hours and achieved all flight test objectives.

The US Army will deploy four EMARSS aircraft in Afghanistan for assessing the forward capabilities of the aircraft.

"The EMARSS can be customised to install several sensor systems such as electro-optical/infrared cameras and MX-15 full-motion video cameras."

The EMARSS is connected to the US Army’s DCGS-A database through a data-link. The DCGS-A is capable of collecting, analysing and distributing data from more than 500 data sources.

The EMARSS facilitates its crew to coordinate with the other intelligence assets near to it. It can immediately access the information from the ground station intelligence experts. It is also capable of performing standalone operations as well as coordinated missions. It has an endurance of more than seven hours.

Avenge is responsible for the EMARSS training and operational testing. The cockpit avionics are supplied by Rockwell Collins.

CACI and Booz Allen Hamilton are responsible for the systems engineering and technical assistance (SETA) support.

MITRE provides the engineering/programme management to EMARSS programme, while Sensor Technologies is responsible for the information assurance. The aircraft engineering is provided by CAS and Science Applications International Corporation (SAIC).

The EMARSS programme is supported by Arlington based CACI, and the software engineering support is provided by Lockheed Martin.

This project forms part of our recent analysis and forecasts of the global Military Aircraft market available from our business information platform Strategic Defence Intelligence. For more information click here or contact us: EMEA: +44 20 7936 6783; Americas: +1 415 439 4914; Asia Pacific: +61 2 9947 9709 or via email.

The BN-2T-4S Defender 4000 is a surveillance aircraft manufactured by Britten-Norman of the UK.

LUNA is a lightweight medium range reconnaissance and surveillance UAV system which has been in service with the German Army since March 2000.