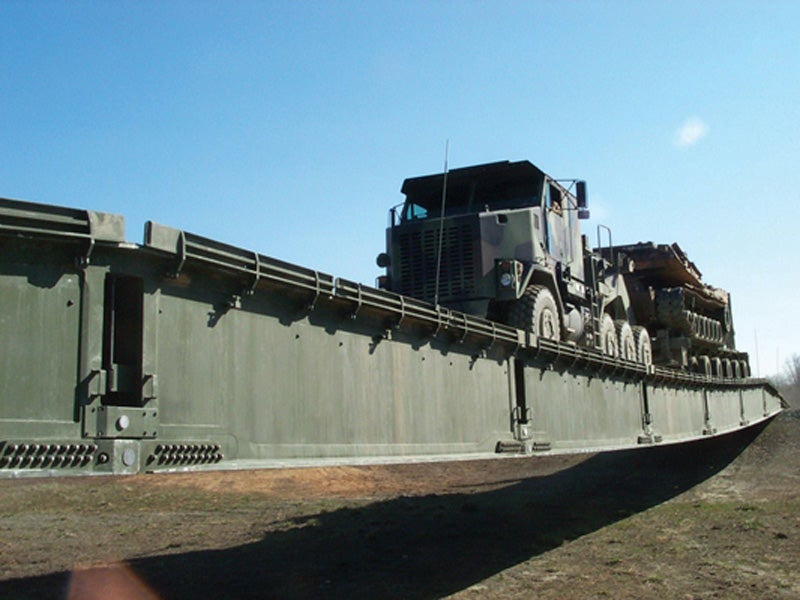 Dry Support Bridge (DSB), a new-generation tactical military bridging system, is operational with the armed forces of the US, Turkey and Switzerland. It is built by WFEL, a subsidiary of Krauss-Maffei Wegmann, which is engaged in providing military and civil mobile bridge systems.

The DSB is designed to provide armed forces with the ability to transport military equipment over obstacles and small water courses, and is also suitable for civilian applications.

Orders and deliveries of the Dry Support Bridge

The Turkish military awarded an £8.5m ($13.1m) contract for the first batch of DSB bridging systems in January 2012.

In December 2011, armasuisse, a procurement agency of the Swiss government, signed a contract worth £57m ($88.8m) with WFEL to supply ten DSB bridges and 14 launch vehicles for the Swiss Armed Forces during 2013-2015. The new DSBs are expected to replace Medium Girder Bridges (MGBs) of the Swiss Army.

armasuisse took delivery of the first batch of four bridge systems in June 2014.

A £37m ($60.5m) contract was placed by armasuisse for an additional six DSBs and ten launch vehicles to the Swiss Armed Forces in December 2013. Deliveries will continue through to November 2016.

The Australian Defence Force (ADF) awarded a contract to WFEL for the supply of dry support bridges in January 2016. The bridges will be delivered to ADF by the third quarter of 2017.

The DSB is built using specially-made lightweight aluminium alloys. It can be deployed by eight crew members and launched within 90 minutes. Spanning up to 46m, the bridge can cover dry or wet gaps to provide improved operational flexibility.

“The DSB is designed to provide armed forces with the ability to transport military equipment over obstacles and small water courses, and is also suitable for civilian applications.”

The tactical military bridge system uses two outer girders for supporting the deck, which fold underneath the decks to facilitate easy transportation and automatically unfold when deployed. The bridge modules can be packed in either a 6m ISO container or loaded on most PLS / DROPS systems. They can also fit into 6m flat bed vehicles.

The 40m single bridge configuration features a DSB launcher fitted with a trailer, and two other support vehicles with trailers. The US configuration comprises two PLS loads, in addition to a standard 40m bridge system. The PLS loads allow for deployment of a 24m bridge and a 30m bridge.

The 46m configuration is provided with a 46m bridge system together with a launcher with trailer, and three support vehicles with trailers. It allows construction of a 46m bridge, two 30m bridges and either one 36m bridge or one 24m bridge.

The launch vehicle has a road speed of 88km/h and a cross country speed of 30km/h. Its approach and departure angles are 40°C and 60°C, respectively.

This project forms part of our recent analysis and forecasts of the global Armoured Vehicles & Counter IED Vehicles market available from our business information platform Strategic Defence Intelligence. For more information click here or contact us: EMEA: +44 20 7936 6783; Americas: +1 415 439 4914; Asia Pacific: +61 2 9947 9709 or via email.