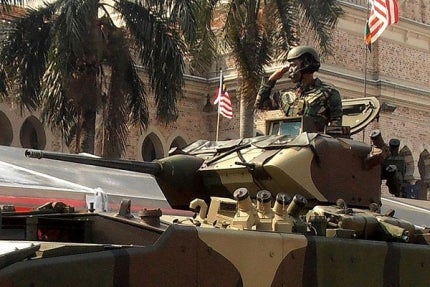 AV8 is an 8×8 multi-role, wheeled armoured vehicle indigenously designed and manufactured by DRB-Hicom Defence Technologies (DefTech), for the Malaysian Army. The AV8 is based on the FNSS-built PARS 8×8 multi-purpose wheeled armoured combat vehicle.

The AV8 is intended to replace the Malaysian Army’s ageing fleet of SIBMAS 6×6 and Condor 4×4 wheeled armoured fighting vehicles.

The first scale model of the AV8 was demonstrated to the Malaysian Armed Forces at the 13th Defence Services Asia (DSA) international defence exhibition in April 2012.

In February 2011, DefTech received a contract from the Malaysian government to design, develop and manufacture a total of 257 armoured fighting vehicles in 12 configurations for the Malaysian Armed Forces through 2018. DefTech will also provide integrated logistics support for the AV8 programme.

Turkish defence firm FNSS Savunma Sistemleri signed a $559m letter of acceptance for the development of the AV8 vehicles in June 2011. FNSS will offer technology transfer and technical assistance for the Malaysian AV8 vehicles.

The 257 AV8 vehicles include 46 units in IFV25 infantry fighting vehicle configuration, 68 in AFV30 version, and 54 in anti-tank configuration. The first 12 IFV25 vehicles were delivered in December 2014, while the remaining 34 are scheduled for delivery in 2015.

The AV8 is made of composite aluminium and steel armour. Its modular design allows for integration of a variety of mission systems.
The vehicle is operated by three crewmen, including commander, gunner and driver, and can carry up to 11 troops. The soldiers enter / exit the vehicle through rear doors, while roof hatches are available for emergency egress.

The vehicle is fitted with an air conditioning system, an automatic fire suppression system and a self recovery winch.

The V-shaped hull provdies up to STANAG 4569 level 2A / 2B protection to the occupants against improvised explosive devices and mines.

The vehicle is fitted with NBC protection system for defence against nuclear, biological, chemical threats. The survivability is further enhanced by smoke grenade launchers located on both sides of the vehicle.

Situational awareness for the driver / commander is provided through two thermal cameras and optical cameras placed in the front and rear. Periscopes at the front of the vehicle provide increased visibility to the crew.

The vehicle has a ballistic computer and touch-screen panels to display images, ballistic data and location details. It also features a laser warning detector for the detection of laser emissions, and a global positioning system receiver to track the exact location.

The AV8 armoured vehicle runs on a Deutz turbocharged diesel engine with an output power of 523hp. It is also fitted with an integrated auxiliary power unit.

"The vehicle is fitted with NBC protection system for defence against nuclear, biological, chemical threats."

The multi-role vehicle can reach a maximum speed of 100km/h and offers a cruise range of 700km. It can travel at a speed of 6km/h in water using thrusters. It can climb a gradient of up to 60%, cross a trench of 2m, and negotiate a side slope of 30% and a vertical obstacle of 0.7m.

Thales was awarded a subcontract by DefTech in September 2011 to provide advanced open vehicle electronic architecture systems for the new AV8 armoured vehicles. The systems include a range of C4ISR equipment, including communications, sensors, command and control, vetronics, optronics and mortar.