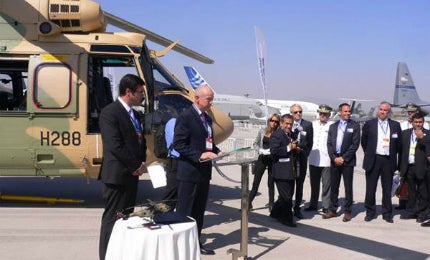 AS532 ALe is the latest member in the Cougar family of medium-lift rotorcraft manufactured by Airbus Helicopters. It is intended for ground attack, transportation of troops, search and rescue (SAR), medical evacuation (MEDEVAC), natural disaster response, and support missions.

The first AS532 ALe Cougar was delivered to the Chilean Army (Ejército de Chile) during the FIDAE International Air and Space Fair held in Santiago, Chile, in March 2014. Airbus delivered a total of 870 Super Puma / Cougar helicopters to its customers worldwide, as of March 2014.

AS532 Ale Cougar design and features

The AS 532 Horizon system was operational with the French Army. The helicopter surveillance system was originally developed to counter any possible threat by the tank fleets of the Warsaw Pact countries.

The AS532 ALe Cougar helicopter weighs 9t and has a sling load capacity of 4.5t. It features a rugged, crashworthy fuselage integrating composite main and tail rotor blades. The fuselage is fitted with a retractable landing gear with trailing arm main landing gear and castering nose wheel arranged in a tricycle configuration. The monocoque tail boom incorporates a stabiliser.

The upper part of the fuselage is used as the transmission deck and the lower part is fitted with floatation gear as well as crashworthy tanks and seats. Footsteps are provided for climbing to the cockpit, cabin and the transmission deck. The helicopter also features built-in jacking and towing points.

A crew of two members can be carried by the AS532 ALe Cougar transport version, as can 24 troops. The MEDEVAC variant can carry ten passengers and stretchers for about six patients.

The AS532 ALe features the same four-axis autopilot and glass cockpit as that of the EC225 Super Puma passenger transport helicopter (now H225). The cockpit also features associated automatic flight control system (AFCS) and modern avionics. It provides seating for a pilot and a co-pilot and is fitted a jettisonable door on both sides. A third crew member is seated in jump-seat with a three-point extensible safety harness.

Cabin of the medium-lift helicopter

"The AS532 ALe Cougar helicopter weighs 9t and has a sling load capacity of 4.5t."

The reinforced crashworthy cabin floor, attached with 15 cargo tie-down rings, allows for a variety of seating configurations. Heating and ventilation in the cabin is provided by six top outlets and four bottom diffusers.

Weaponry aboard AS532 ALe

The AS532 ALe Cougar attack variant can be armed with pod-mounted 20mm cannons, 68mm rocket launchers and rapid-fire machine guns that are mounted on sides.

Engine and performance of the multi-mission Cougar helicopter

The rotorcraft is powered by two Turbomeca Makila 1A1 engines turbine engines, which generate 1,400kW of power each. It carries 1,984l of fuel in six crashworthy fuel tanks placed under the fuselage, while auxiliary and external fuel tanks are optional. Multi-purpose air intakes are installed to protect the helicopter from sand and icing.