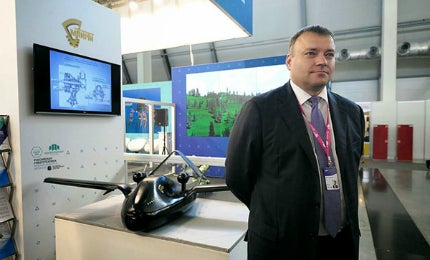 Chirok (Teal) is an unmanned amphibious reconnaissance and strike drone (RSD) being developed by United Instrument Manufacturing Corporation (UIMC), a branch of state-owned Rostec Corporation, with assistance from the Russian Ministry of Defence.

The first 1:5 scale Chirok prototype UAV was unveiled at the Innoprom Trade Fair in Yekaterinburg in July 2014. The fully-fledged model was introduced at the International Aviation and Space Salon MAKS 2015 UAV air show in Moscow, Russia. It is being offered to both civil and military customers.

The Chirok UAV can be used for civilian purposes such as monitoring forest fires, disaster areas and road traffic, as well as conducting wide-area patrol. The military variant of Chirok can be deployed in cargo transportation, surveillance and reconnaissance, as well as military assault with onboard bombs, rockets, and precision missiles.

Development of the Chirok drone

UK-based military vehicle manufacturer TMV unveiled its 6×6 at the DVD 2010 show in the UK in June 2010. The TMV 6×6M SF is a six-wheel drive, six-wheel steer vehicle designed specifically for military and special forces reconnaissance.

The design and development of the unique unmanned strike drone began in the late 1990s in collaboration with the Moscow Research Radio Engineering Institute. The fabric of the UAV’s air cushion is patented by Rostech Corporation.

The first flight tests of the Chirok UAV began in January 2015. Central Aerohydrodynamic Institute tested the prototype at City of Zhukovsky. Serial production of the UAV was expected to commence in 2016, but delayed.

Chirok is manufactured from an all-composite carbon fibre material and features an innovative design with a hovercraft chassis, which allows take-off and landing without the need of a runway. It can land on unprepared surfaces, including snow-covered fields or handy waterways. It is capable of operating in harsh environments.

The fuselage includes an enlarged forward section fitted with composite wing and a twin-boom tail at the aft.

Two inward-cranked vertical tail fins at the end of booms are articulated at their tips to form a single structure. Power is generated by two small engines on top of short stubs.

Each engine drives a pair of four-bladed propellers in pusher configuration.

“The first 1:5 scale Chirok prototype UAV was unveiled at the Innoprom Trade Fair in Yekaterinburg in July 2014.”

The UAV features air cushion, which is fully retractable during flight, thus enhancing the aerodynamic performance. The weapons bay eliminates the need to carry under-wing missiles, which improves the landing performance and reducing the visibility of the UAV.

Chirok is also suitable for carrying out amphibious and special operation forces (SOF) missions and for delivering cargo to hard-to-reach areas.

The optoelectronic devices fitted aboard enable surveillance and monitoring of areas of interest.

The UAV has a wingspan of 10m and can ascend to an altitude of up to 6,000m. It has a maximum flight range of 2,500km on single fuelling. Its maximum take-off weight is 700kg, whereas its payload weight limit is 300kg.

Technical specifications of the UAV are expected to be improved further by the completion of the development.

The UAV can be armed with high-precision weapons, such as small-size guided missiles, bombs, and rockets. Its spacious weapon storage bay allows the carriage of armament internally in addition to improving the aircraft’s aerodynamics and stealth characteristics.