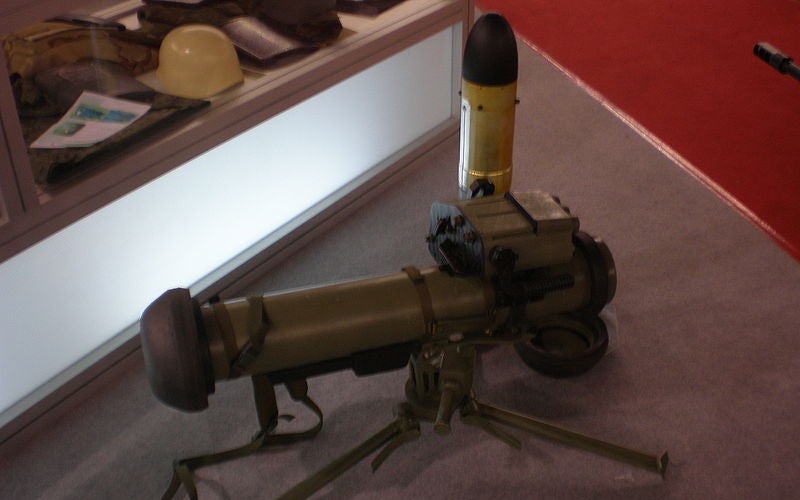 The Bumbar (Bumble Bee) portable, short-range, anti-tank guided weapon system is intended for use by the armed forces to engage and destroy ground-based stationary or moving targets.

The missile system is designed by Serbian military equipment designer Military Technological Institute (VTI) and produced by Serbian arms manufacturer Krušik. It has been in service with the Serbian Armed Forces since 2012.

Bumbar features a lightweight design made of non-metal, plastics or light metal alloys. The weapon has a soft launch capability for firing from confined spaces during combat operations in urban areas.

The system has a length of approximately 1.2m, a total mass of 19.8kg, and is ready to fire within six seconds. Sub systems include 136mm guided rockets, missile tubes, guidance assembly and control system.

The anti-tank missile has all-terrain capability and is equipped with four tail fins and two thrust vector vanes, one on either side in the middle section. It can be either shoulder launched by a single operator from a standing / kneeling position or fired from a prone position when mounted on a 4kg tripod.

Weighing approximately 4kg, the firing post comprises a sighting system and a guidance section. The missile is guided by a thin wire link and tracked by the operator at the launch site through a semi-automatic command to line-of-sight (SACLOS) system.

The sighting device calculates angular difference, frequency, time and space discrimination between the missile position and the target location, and sends guidance commands to the missile through the wire link.

"The weapon has a soft launch capability for firing from confined spaces during combat operations in urban areas."

The Bumbar weapon system is powered by a solid propellant rocket motor consisting of two phases, which are boost and sustain. The boost phase develops enough thrust to propel the missile with high speed, while the sustain stage provides high thrust and flight velocity, allowing the missile to reach its target with minimum endurance.

The guided weapon has a speed of 18m/s at launch and can fly at a maximum speed of 245m/s. It has a minimum range of 75m and can reach its maximum range of 600m in 4.6 seconds. The range can be extended up to 1km with the installation of a laser beam riding guidance system.

Bumbar is capable of destroying moving targets with 90% probability. It can operate under all weather conditions during the day and at night, and can withstand temperatures ranging between -30°C and 50°C.

This project forms part of our recent analysis and forecasts of the global missiles and missile defence systems market available from our business information platform Strategic Defence Intelligence.