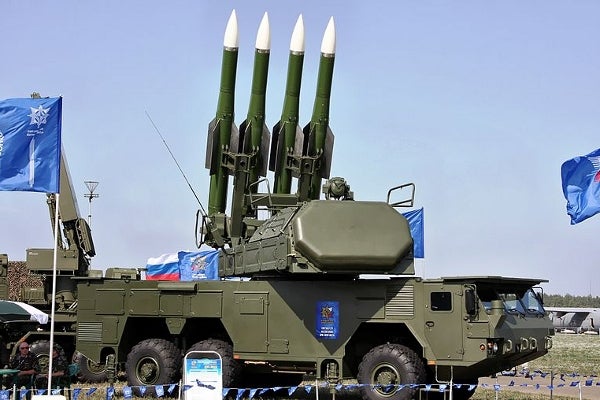 The Buk-M2E surface-to-air missile (SAM) system is an export variant of the Buk-M2, which entered into service with the Russian Army in 2008. V. Tikhomirov Research Institute of Instrument Design (JSC NIIP, Zhukovsky), which is part of Almaz-Antey, is the prime developer of Buk-M2E system. The prime manufacturer is Ulyanovsk Mechanical Plant (UMZ). The design process of the system was completed in 1988.

Syria placed a contract worth $1bn for Buk-M2Es in 2007. The systems were also in service with the Venezuela and Azerbaijan.

An air defence missile brigade of the Russian Army conducted test firings of the missile system at the Kapustin Yar Missile Test Range in September 2010. The SAM successfully destroyed five targets with five missiles during the tests.

The Iskander (Nato: SS-26 Stone) is a tactical ballistic missile system being manufactured by the Federal State Unitary Enterprise, Design Bureau of Machine Building, for the Russian ground forces.

The Buk-M2E missile system can perform multiple missions with greater mobility and can simultaneously engage a maximum of 24 targets.

The combat equipment of the ADMC can be deployed on high-speed self-propelled tracked chassis, which accommodates a crew of four. The advanced hardware / software technology of the anti-jam channels allows the combat equipment to provide reliable operation under barrage jamming conditions.

The Buk-M2E missile system is equipped with a 9S510E command post, a 9S18M1E detection and target designation radar (TDR), and up to 12 9A316E loader-launcher units (LLUs).

The ADMC comprises up to six 9A317E transporter erector launcher and radar (TELAR) self-propelled fire units (SPFUs). The SPFU can be mounted with a 9S36E illumination and guidance radar (IGR) to simultaneously track and illuminate multiple targets flying at low and extremely low heights in all terrains. The mast-mounted antenna of the 9S36E radar can be raised to a height of 21m.

The ADMC uses 9M317 anti-aircraft-guided missiles (AAGMs) manufactured by Dolgoprudnenskoe Scientific Production Plant (DNPP). Each missile has a length of 5.5m, a wing span of 860mm and a weight of 710kg, and can carry up to 70kg high-explosive fragmentation warhead with radar proximity and contact fusing system. The missile is propelled by solid fuel propulsion system.

Mobility and performance of the Buk-M2E missile system

The Buk-M2E missile system based on the GM-569 chassis can run at a speed of 65km/h on road and at 45km/h on dirt roads, and can travel for up to 500km without refuelling.

“The Buk-M2E missile system can perform multiple missions with greater mobility and can simultaneously engage a maximum of 24 targets.”

A single missile can destroy tactical aircraft and helicopters with a probability between 0.9 and 0.95, while the kill probability against tactical ballistic missiles ranges between 0.6 and 0.7. The missile can operate continuously for one day with refuelling and has a tear-down time of five minutes.

The missile system can operate in temperatures up to ± 50°C and wind speeds up to 30m/s. Its maximum operating altitude above sea level is 3,000m.

STEYR MOTORS is the specialist for diesel engines out of...