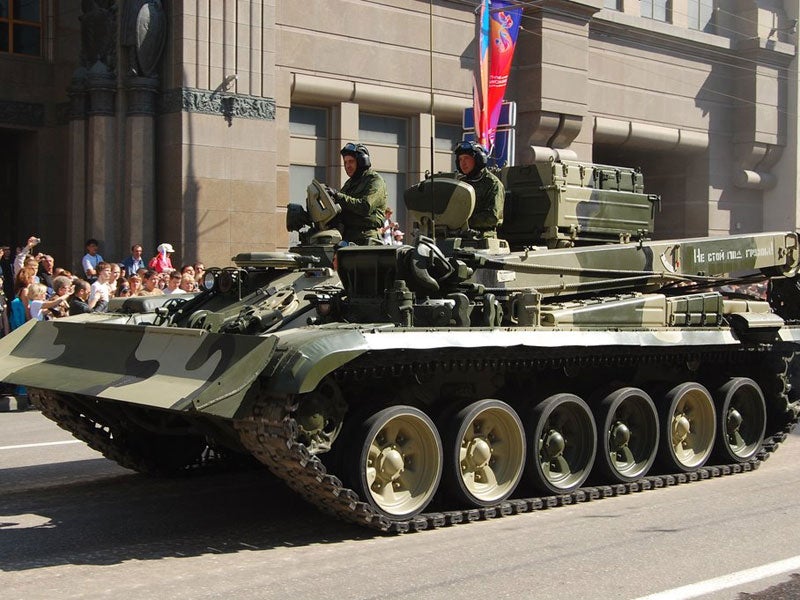 BREM-1M is an armoured recovery vehicle (ARV) developed by JSC research and production corporation ‘UralVagonZavod’ and is primarily operated by the Russian Army.

The BREM-1 is based on the modified chassis of the T-72A main battle tank. The vehicle integrates a new superstructure in place of T-72A’s turret. The hull accommodates driver’s position at forward, commander and handler’s seating in the centre and power pack at the rear. The crew enter and exit the vehicle through hatch covers located on top of the hull.

The vehicle is equipped with a front-mounted dozer blade, crane, winch and other specialised equipment to support recovery operations.

The BREM-1 is mounted with a crane having a load carrying capacity of 20t, which can lift damaged or stuck vehicles up to a maximum height of 5.98m. The maximum outreach of the crane is 5.3m. The main winch offers power to pull 35t worth of load, which can be increased to 140t using pulleys. The cable has a length of 200m and offers a cable winding speed of 0.217m/sec.

The vehicle is also hinged with a 530kg-capacity auxiliary winch with a 400m-long cable, and semi-rigid towing attachment for towing damaged vehicles.

The forward hull of the vehicle integrates a spade bulldozer fitted with a 3.1m-wide blade. It serves as an earth anchor during recovery operations and also allows the vehicle to perform excavation and clearance missions. The vehicle also carries welding equipment and various tools to perform repair and servicing of tanks.

The recovery vehicle is armed with a manually controlled anti-aircraft machine gun mount to defend airborne threats. The 12.7mm 6P50 machine gun on the mount offers a rate of fire of 650-750 rounds a minute. The belt-fed gun can carry 350 rounds of ammunition.

The gun is fitted with a VK-10T sight integrating a collimating telescope. The elevation and depression angles of the machine-gun are 75° and 5° respectively. The gun can strike aerial targets within the range of 1,500m and ground targets at a distance of 2,000m.

The BREM-1M is powered by a four-stroke, poly-diesel engine named V-92S2 with liquid cooling and turbo charging from supercharger. The engine develops a maximum power output of 1,000hp.

"The vehicle is mainly used to recover damaged tanks and armoured vehicles from the battlefield."

The torsion bar suspension integrates six road wheels on either side of the hull with the idler and drive sprocket at the front and rear, respectively. There are three return rollers, which support the inside of the track.

The first, second and sixth road wheel stations are equipped with shock-absorbers. The single pin type track of the BREM-1M houses rubber bushes.

The vehicle has a maximum road speed of 60km/h and can attain a range of 700km on road. It offers a range from 460km to 650km on dirt roads, whereas the range varies between 150km and 430km when operating on dirt road with a towed tank.

The BREM-1M ARV can negotiate a gradient of 60% and a side slope of 40%. It has the ability to cross a vertical steep of 0.85m and a trench of 2.8m. The vehicle can ford a depth of up to 5m with preparation.