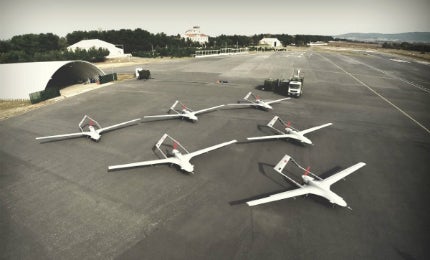 Bayraktar is a mini UAV produced by Baykar Makina for the Turkish Armed Forces. Designed for short range reconnaissance and surveillance missions, Bayraktar is currently operational with the Turkish Land Forces.

The mini UAV was developed by a joint venture of Baykar Makina and the Kale Group. The hand-launched, fully autonomous UAV took in to the skies first in October 2005. The Bayraktar fleet has completed more than 20,000 flight hours.

In August 2006, the Turkish Army placed a contract with Kale-Baykar joint venture for the delivery of 19 Bayraktar hand-launched mini UAV systems.

The first acceptance tests of the UAV systems were successfully completed and the prototype aircraft delivered in December 2007. The flight demonstrations were concluded in 2009 and the UAV was accepted by the Turkish Land Forces Command in 2010.

The fuselage components are made of composites including carbon fibre and glass fibre, Kevlar, foam and epoxy materials. The front section houses modular payloads such as a thermal camera module or day camera module, which can be installed pre-flight.

The wing assembly consists of the right wing, middle wing and left wing. The V-Tails are equippeded to the tail boom, which is connected to the main fuselage. The main fuselage is mostly covered with a Kevlar laminate to absorb the shock of belly landing. The main structural parts of the UAV are interchangeable. The UAV is driven by an electric motor powered by battery.

The Bayraktar mini UAV was tested and demonstrated with electro-optical / infra-red payload. It can be configured for carrying either thermal camera (Payload 1) or day camera (Payload 2).

The Bayraktar mini UAV can be controlled either manually from the ground control station or through autopilot system. Equipped with advanced software algorithms, the autopilot system enables the mini UAV to be used as a reliable flying platform for reconnaissance missions. The UAV system uses frequency-hopping spread spectrum (FHSS) digital data link for the data transfers.

The UAV can autonomously perform taxi, takeoff and landing operations with the help of onboard sensors. It can automatically return home and land safely in case of lost communication; hence useful in GPS-denied environments. The UAV is also equipped with stall and spin control mechanism for safe flight operations.

"Bayraktar features a unique parachute system for the recovery."

The control screen is used for displaying the flight status data as well as switching the UAV from manual to automatic mode. The GCS operator controls the payloads and sensors while gathering information from the battlefield.

RECADATA
RECADATA is one of the professional SSD manufacturers, dedicated to...
SUBSCRIBED