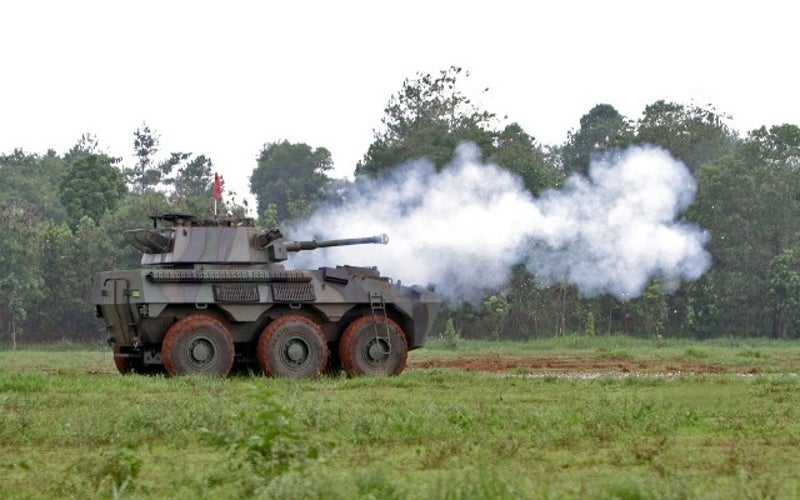 Badak (English: Rhino) is a fire support vehicle (FSV) produced by PT Pindad in collaboration with CMI Defence. The FSV is intended to meet the requirements of the Indonesian Army and was unveiled and christened by PT Pindad at the 2014 IndoDefence exhibition held in Jakarta.

PT Pindad (Persero) signed a memorandum of understanding (MoU) with CMI in September 2014, to develop CMI Cockerill turret systems with a wide range of weapons from 25mm to 105mm calibre for its new combat vehicles.

The Badak FSV underwent a series of firing tests as part of the certification process by the research and development department of the Army (Dislitbang AD) at Infantry Education Centre (Pusdikif), in December 2015. The trials measured the accuracy of the 90mm main weapon system.

PT Pindad received an order from the Ministry of Defence, Republic of Indonesia to deliver 50 Badak 90mm direct fire support vehicles to the Indonesian Army in January 2016. Pindad plans to roll out 25 to 30 Badak vehicles each year from its plant in Bandung.

The Badak FSV incorporates an all-welded monocoque steel hull based on a modified chassis of the Anoa 6×6 armoured personnel carrier (APC). The layout houses the power pack on front-left, driver’s position on the right side of the forward hull, and turret in the middle of the hull.

The fire support vehicle has a length of 6m, width of 2.5m and a height of 2.9m. It comes fitted with VHF / HF radio communications, intercom, air-conditioning and heating system, global positioning system (GPS) and navigation system.

The main weapon fitted to the vehicle is a Cockerill CSE 90LP low-weight, two-person turret with 90mm low-pressure gun.

"The main weapon fitted to the vehicle is a Cockerill CSE 90LP low-weight, two-person turret with 90mm low-pressure gun."

The gun is equipped with high-efficiency, single-stage muzzle brake and hydro-spring recoil system. It offers a firing range of 6km at 30° elevation. Accurate firing is delivered by an electromechanical gun and turret drive system and a day / night digital fire control system. The turret can be integrated with a range of sight and fire control systems including day / night gunner’s sight, laser range finder and a ballistic computer.

The secondary armament includes a 7.62mm co-axial machine gun and a 7.62mm anti-aircraft machine gun. A bank of four smoke-grenade dischargers is installed on either side of the turret.

The vehicle is powered by a new 340hp six-cylinder diesel engine coupled to a fully-automatic transmission with six forward gears and a reverse gear. It includes double wishbone independent suspension for better stability while firing the 90mm canon.

The propulsion system enables the vehicle to achieve a maximum road speed of 90km/h and a maximum range of 600km.