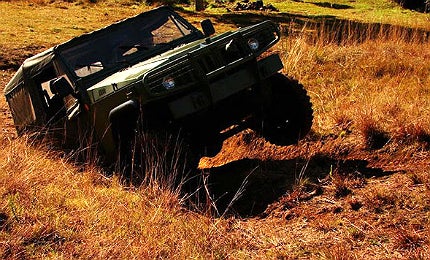 The Marruá (Wild Bull) family of military utility vehicles is produced by Agrale, a company based in Brazil. The vehicles are used for troop transport, medical, command and control, electronic warfare and reconnaissance missions.

The Marruá range of vehicles is primarily operated by the Brazilian Army and the Brazilian Marine Corps. The vehicles were also adopted by the armed forces of Argentina, Ecuador and Paraguay, as well as the United Nations for peacekeeping missions in Haiti.

Agrale began the development of Marruá vehicles based on the Engesa EE-4/EE-12 utility vehicle. The Marruá 4×4 Viatura de Transporte Não Especializada (VTNE) was offered for the armed forces of Brazil. The Marruá was accepted into service by the Brazilian Armed Forces in July 2005.

The Brazilian Marine Corps received the first batch of Marruá vehicles in 2008. The vehicles were provided with corrosion resistant paint, high-flotation tires and seating arrangement for six personnel.

The military utility variants of Marruá are available in five configurations.

The Marruá AM1 – VTNE 1/2t is a baseline variant equipped with four seats and a removable hood. The AM10 REC – VTL / VTL REC variant is equipped for armed reconnaissance missions.

The Marruá range of military utility vehicles is designed to conduct missions on extremely rigid terrains. The traditional layout of the vehicle houses engine in the front, crew cab in the centre and troop / cargo section at the rear. The vehicles are either enclosed with soft tops or hard tops.

The baseline vehicle has a length of 3.94m, width of 1.84m and a height of 2.04m. The gross weight of the vehicle is 2,460kg. The Marruá AM1 can carry a maximum payload of 500kg. The vehicle offers seating for four passengers.

The Marruá vehicles accept a wide range of weapon systems for use in combat missions. The vehicles can be mounted with 7.62mm or 12.7mm machine guns, antitank missile launcher and 106mm recoilless cannon.

Engine of the Brazilian military vehicles

The Marruá family of utility vehicles is also offered with EURO III compliant engine developing a maximum power of 103kW. The standard fuel tank capacity of 100L provides a maximum range of 1,000km.

The Marruá AM1 can travel at a maximum speed of 128km/h on road. The maximum controlled speed of the vehicle is 4km/h. The suspension system includes longitudinal and transverse bars with panhard bar and telescopic double-acting shock absorbers.

The hydraulic servo-assisted disc / drum service brakes ensure accurate stopping of the vehicle. The vehicle has a ground clearance of 260mm. It can negotiate an incline of 60% and a side slope of 30%. The approach and departure angles of the vehicle are 64° and 52° respectively. The Marruá AM1 can ford in a maximum water depth of 600mm without snorkel.