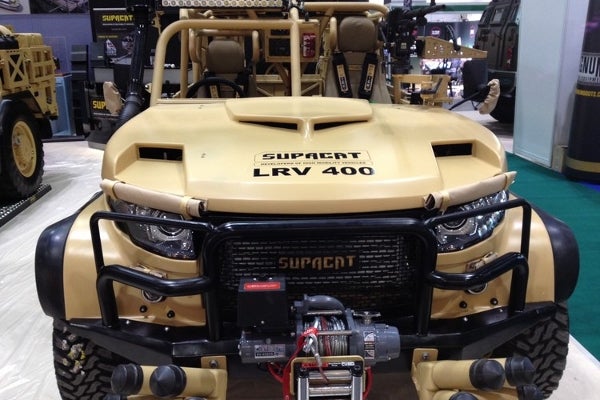 The Light Reconnaissance Vehicle (LRV) 400 is a high speed and high mobility off road vehicle developed to carry out border patrol, reconnaissance, rapid intervention and light strike missions. It is a militarised variant of the Wildcat off-road motorsport vehicle.

Supacat and UK-based motorsport company QT Services jointly developed the LRV 400. Supacat introduced the LRV 400 at the Defence Security and Equipment International (DSEi) exhibition 2013 in London. The vehicle is available in petrol and diesel versions.

Development of the LRV 400

The LRV 400 was developed based on market research and customer feedback on a proof-of-concept closed cab demonstrator jointly developed by Supacat and QT Services in 2011.

The two companies adopted a commercial-off-the-shelf platform for the LRV 400 to provide affordable capability.

“The two companies adopted a commercial-off-the-shelf platform for the LRV 400 to provide affordable capability.”

Designed to operate in harsh environments, including deserts and rough terrains, the LRV 400 is a low cost and high mobility platform, filling the gap between the heavier Jackal surveillance, reconnaissance and patrol vehicle and the smaller All-Terrain Mobility Platform (ATMP).

The 4.3m long and 1.8m wide vehicle is designed with tubular space frame chassis. The space-frame design of the vehicle enables easy re-configuration to help address different operational roles. The vehicle is air transportable by the CH-47 Chinook helicopter.

The LRV 400 is manned by three crew members (commander, driver and gunner). Its gross and kerb weights are 3,500kg and 2,100kg respectively. The fuel capacity is 160 litres.

UK-based survivability solutions provider ArmourWorks designed and manufactured a lightweight, convenient seat, which is primarily a standing platform that can be optionally used as a comfortable and safe seat, for the Supacat. Hutchinson provided bead-lock run flats for the vehicle.

Various communication and weapon systems can be integrated with the vehicle based on customer specifications and configuration.

The LRV 400 is fitted with low-weight armour solutions and can be hinged with add-on armour, for increasing the protection. It is also fitted with ballistic crew seats and ballistic armour.

The vehicle comes with 265/75 R16 tyres, which can be optionally changed to 265/75 R18 tyres. An external tyre inflation system can also be connected.

The vehicle can ford a depth of 1.0m. The gradient and side slopes of the vehicle are 45° and 40° respectively.

An onboard jacking system allows the LRV 400 to lift itself from grounding situations during combat recovery missions.

Cameleon IV440 is a modular mission system (MMS) vehicle designed and manufactured by the Ovik Group based in Dorset, UK.

The Ultralightweight Field Howitzer (UFH), designated M777 in the USA, was selected in 1997 by a joint US Army / Marine Corps initiative to replace the existing inventory of M198 155mm towed howitzers.