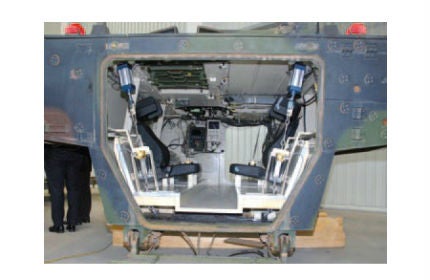 The threat to vehicles in crisis regions throughout the world comes particularly from mines and improvised explosive devices (IED). These explosives affect the structure of the vehicle and its body from below and from the sides. Such impacts are countered by the so-called Zero Shock® System.

Its unique effectiveness was proved in several test series in German and international technical centres. The shock and blast effects to the interior of the vehicles could be reduced almost to zero. The Zero Shock® System is already in use in several armies.

This sustainable system can also be retrofitted in almost every current type of vehicle.

When the Zero Shock® System is triggered in an emergency, the pulse of a shock wave is not only dampened but the container floor with the mounted installation kits is physically decoupled. Consequently it is possible to keep the deformation of the outer shell away from occupants and technical equipment in a vehicle or container to prevent lethal consequences for the crew and the destruction of technical installations.