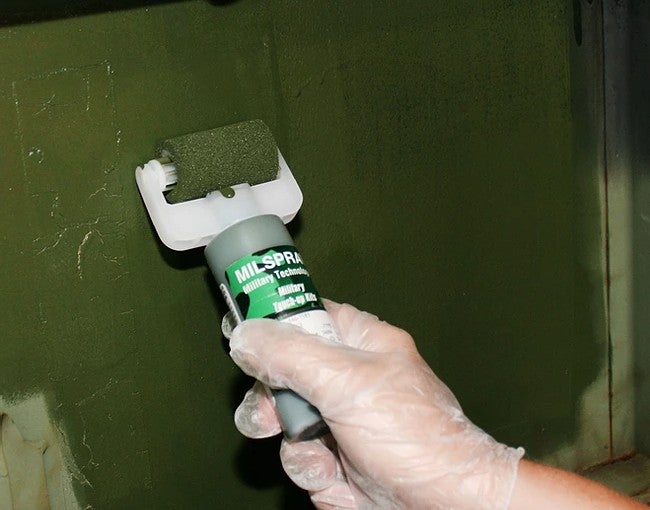 CARC stands for Chemical Agent Resistant Coating and it is better known as the camouflage paint used on United States Army and Marine Corps tactical vehicles and equipment. It is also used on rotary-wing aircraft, or helicopters, in use with both the Army and Marines.

CARC camouflage provides much more than visual camouflage and is a critical element in efforts to increase troop survivability on the battlefield. The rights to the patented CARC material are owned by the U.S. government and certain manufacturers are licensed to produce it for military use. CARC is also regulated under the International Traffic in Arms Regulation (ITAR).

MILSPRAY’s patented pre-filled two (2) ounce CARC touch-up kits are self-contained and designed to perform minor touch-up applications. Additionally, and for convenience, each case contains twelve (12) protective gloves, two (2) sanding blocks, and two (2) lint-free tack cloths. Because of the small quantity of paint that is contained in each individual kit they can be shipped by standard commercial means without incurring hazardous material handling fees. Also, the small individual quantities of paint reduces hazardous material quantities after use. If used in its entirety, bottles can typically be discarded in the trash. Please refer to your base’s particular regulations pertaining to hazardous materials. They are available with aerosol, brush, or roller applicators.

MILSPRAY® is pleased to announce that we have been awarded the Equipment – Corrosion, Surveillance,...

The True Cost Of Corrosion

Corrosion, rust, oxidation, rot….it affects us all, whether it is on our vehicles, boats, fences...