Modular Buildings for Military Use 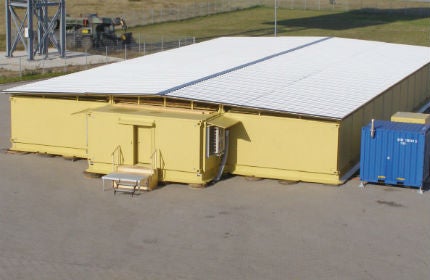 The worldwide operations of our armies have one feature in common. They rely principally on the infrastructure of camps as starting points for patrols and withdrawal bases for deployed soldiers. Camps accommodate operation centers, vehicle repair shops or occasionally even an entire airfield. To comply with all these different requirements, camps must provide one crucial capability – force protection.

Also within the infrastructure of a camp the soldiers are jeopardized not only by car bombs but particularly by direct and indirect fires.

To counter such threats, DREHTAINER, based on their long-standing experience, developed a concept which has meanwhile been implemented and proven its worth a thousand times – the modular chalet.

Not only can camp containers with integrated walls – which are frequently used as accommodations – be assembled to a modular chalet but also so-called modular containers which usually feature a high-protection front wall only. These containers can also be supplied with only four corner pillars to allow creating differently sized compartments within the modular chalet. In this way, any conceivable functionality such as operation centers, conference rooms, dining halls, recreation rooms or accommodations can be implemented with supreme protection capability.

A modular chalet is set up in next to no time. The containers are simply interconnected by means of their integrated cutoff couplings. So any container arrangement can still be modified on the local site.