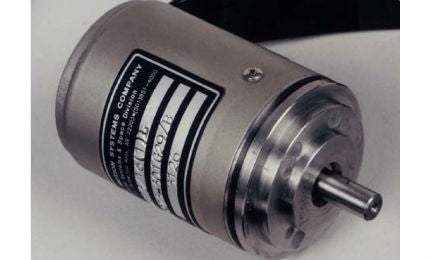 MicroSeries® Encoders are ultra small, absolute, optical shaft encoders. They have substantially better accuracy than other shaft angle digitisers. MicroSeries® Encoders are designed for applications where small size, medium resolution and insensitivity to power interruptions are desired. The LSI MicroSeries® was introduced to significantly reduce the size of the encoder, lower the cost, and provide a more versatile electrical interface.

The L model is the basic encoder configuration which outputs a four-wire multiplexed, three-state logic level, MicroSeries® Code Word. The encoder is addressed by three enable lines activated in a controlled sequence. This model is intended for direct interface with a user (or BEI) furnished microprocessor where the microprocessor can be programmed to perform the encoder’s digital logic functions. For programming details, request BEI Technical Bulletin "LSI MicroSeries® Encoders – Principles of Operation/Microprocessor Control and Decoding."

Many people are confused as to how accuracy and resolution are specified by BEI.