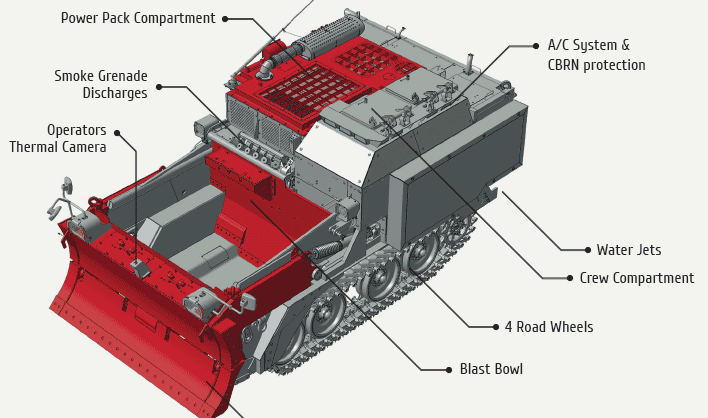 AACE is an amphibious, armored, tracked, combat earthmover; designed for the preparation of river banks during river crossing missions. It is capable of performing bulldozing, rough grading, excavating, hauling, and scraping operations. As compared to standard heavy-duty vehicles; AACE has the capability to take in ballast from the soil ground to its ballast canister, when necessary the vehicle is also capable of discharging its ballast canister at the end of the operation. In standard heavy-duty vehicles, the dozer blade is hydraulically operated while the vehicle is stable.

However, in AACE it is fixed to the vehicle. With its adjustable hydraulic suspension system, the front section of AACE can be shifted in the vertical axis. This capability enables the blade or ballast canister to make contact with the soil, and penetrate it. As a result, shoveling and plowing can be performed more efficiently. These activities can also be performed while the vehicle is on the move.

One of the most important and unique features of AACE is its amphibious capability. It can be operated with a crew of 2. In addition, AACE is fitted with modern electronic systems such as day and night cameras, multi-function LCD monitor and air-condition system.

To provide the amphibious capability, together with the mine and ballistic protection requirements; AACE hull structure is made of ballistic aluminum.

Its modern hydraulic system and power transmission enables the vehicle to operate with higher maneuverability and operational performance.

AACE’s power pack consists of fully automatic transmission, coupled with a diesel engine. AACE is capable to speed up to 45km/h on land. It can travel safely in river streams against current speeds up to 1.5 m/ sec with 360° high-maneuverability through its two water jets, placed at the rear section on both sides of the vehicle.

AACE was manufactured as a local development and manufacturing project of FNSS. Today the AACE is used by the Turkish Land Forces in various missions and have become combat proven in certain operations.