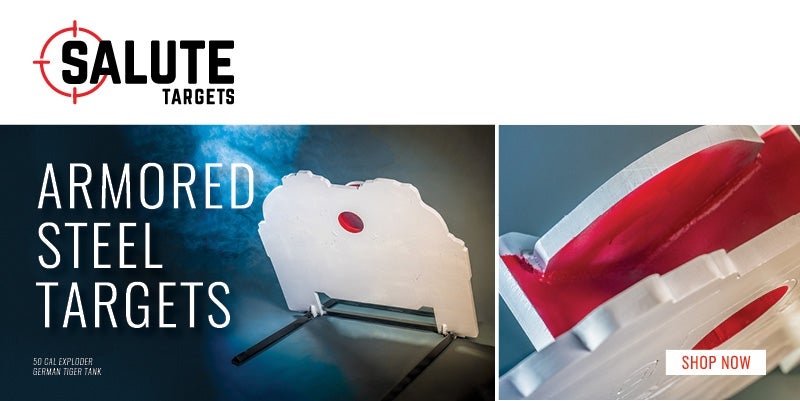 Probably the most recognised tank ever built, the Tiger I has come to symbolise German armour, shock, and firepower. Ordered into production in August 1942, this tank was a clear response to formidable Russian armour the T34 encountered on the Eastern front.

The tank was fearsome in capability. Thick armour and the high-velocity 88mm gun enabled the Tiger to destroy enemy armour at long range. Russian T34s and Allied Shermans had to rapidly close the range and outmaneuver the Tiger in order to destroy it.

Salute’s German Tiger Tank Target was created to honour and emulate the intimidating tank it’s named after. As part of our Exploder Target line, you’ll be rewarded with a flash, cloud of smoke, and accompanying boom! And you control the size of the explosion with Sure Shot.

● The largest exploder steel target available on the market
● Use with Sure Shot Exploding targets.
● You’ll love to shoot and get a boom with this big steel tank-shaped target, one of the original targets conceived and built by Salute Targets

All of our targets are made of the highest quality steel that survives the elements. They’ll last through rain storms, high temperatures, multiple coats of paint, and just about every caliber you can aim at them.

Salute Targets immediately confirms your shooting skills with the bullet’s plinking sound against the metal, to give you instant satisfaction and assessment of your performance.

Ours are the only steel targets designed for protection and safety, built with angles that deflect bullet fragments to the ground or side, and not towards the shooter.

Salute Targets are portable. Most are light and easy to tear down and set up quickly, and we built them to pack and travel compactly too. Spend more time shooting, wherever you want to go!