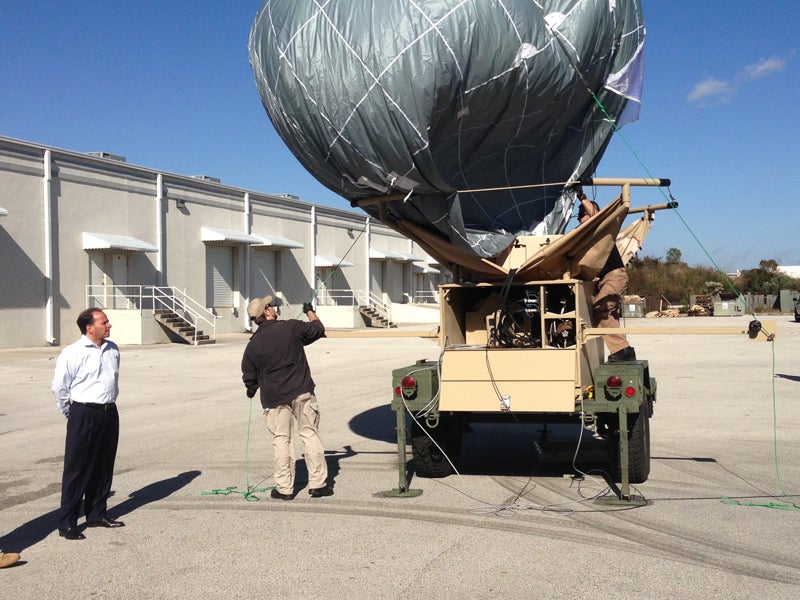 The US Department of Defense (Dod) has taken delivery of the second Blimp in a Box (BiB) aerostat system from World Surveillance Group (WSGI), following testing, inventory accounting and an initial round of training at the Fort Polk in Louisiana, US.

The shipment follows a $605,000 contract received by the company’s wholly owned subsidiary in January, Global Telesat, to supply a set of BiB systems.

Awarded following a demonstration to the DoD in Florida, in December 2012, the contract also included supply of on-location support for technical fact gathering, installation and training for soldiers in preparation for future military exercises involving the systems.

WSGI president and CEO Glenn Estrella said the company was now looking to collaborate with the DoD as the systems begin to participate in military exercises.

"We intend on utilising all our resources to support our customer as we continue to advance the BiB tactical aerostat system," Estrella said.

"We intend on utilising all our resources to support our customer as we continue to advance the BiB tactical aerostat system."

The first system was handed over with support from WSGI’s another wholly owned subsidiary, Lighter Than Air Systems (LTAS) in April.

Equipped with a day and night electro-optical/infrared camera, the BiB is a tethered system designed to provide troops with semi-persistent, mobile intelligence, surveillance and reconnaissance (ISR) at the platoon level in the battlefield.

Quick to recover and rapidly deployable by a two-man crew, the self-contained system also offers real-time day and night data for improvised explosive device (IED) and hostile activity detection, border security, as well as other governmental and civilian operations.

Packaged in an MRAP all-terrain vehicle (M-ATV), high-mobility multipurpose wheeled vehicle (HMMWV) or a pick-up truck towable box, the turnkey system is released by an automated launch and recovery system to an appropriate altitude to provide critical detection capabilities for several miles.