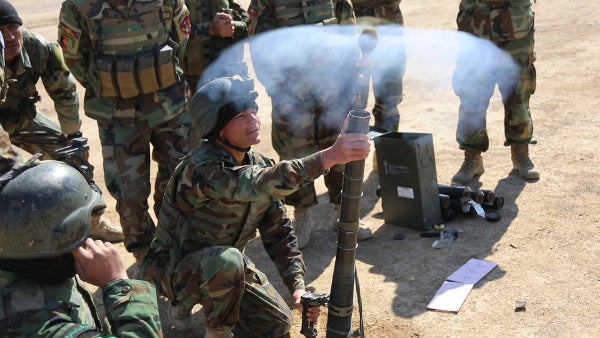 Watervliet Arsenal has been awarded an urgent operational requirement (UOR) contract for production and delivery of 60mm-mnortar systems to the Afghan National Army (ANA).

Awarded as part of the US State Department’s foreign military sales (FMS) programme, the $5.9m contract covers the supply of 900 mortar systems to provide indirect fire capability to the ANA, following strategic withdrawal of US forces from the country by 2014.

The contract also aims to ensure speedy transition to A support role for the US and coalition forces by the spring of 2013, as announced by the US President Barack Obama in his State of the Union address earlier this month.

Speaking during a recent production meeting to senior Arsenal leadership, Watervliet Arsenal commander colonel Mark Migaleddi said the contract formed part of a concentrated fielding effort and would deliver up to 150 systems a month.

"Our first shipment of mortar systems is currently being assembled for shipment and will go out this month."

Watervliet Arsenal production planning and control division chief Ray Gaston said: "Our first shipment of mortar systems is currently being assembled for shipment and will go out this month."

Under the contract, the company’s facilities will primarily serve as a staging area for 60mm mortar several parts, including barrels and base plates being shipped by other army installations, and will subsequently package them into complete mortar systems followed by delivery to Afghanistan.

Having a maximum range of 3,500m, the 60mm mortar system is primarily used by the infantry as an indirect fire weapon in cases where a high-angle trajectory is needed to hit enemy troops, materiel and positions in the battlefield.

All deliveries under the contract are scheduled to complete by the end of August 2013.