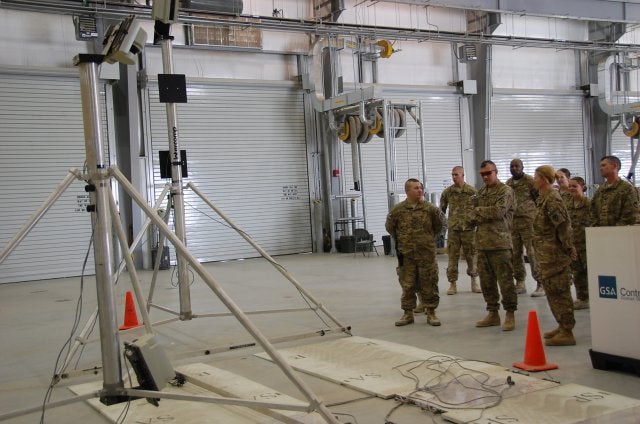 The US Army is using an advanced weigh-in-motion system to streamline the retrograde of approximately 28,000 military vehicles and trailers in Afghanistan, by December 2014.

Dubbed the deployable automated cargo measurement system (DACMS), it can rapidly record a vehicle’s length, width, height, weight, as well as number of axles and centre of balance, eliminating the need for the driver to come to a halt.

Fitted with two laser-enabled reading posts and a set of digital floor-pad sensors, the portable system is being used by the army field support Battalion-Kandahar (AFSBn-Kandahar), 401st army field support brigade to take real-time and precise measurements required for its automated load-planning systems.

After processing of all pieces, the system, which can be set up and taken down within 30 minutes, outputs the resulting data into a fielded logistics information technology systems-acceptable format, eventually lowering the measurement inaccuracies resulting from manual recording and entry of the data.

"The system has reduced the time for manual weighing and measurement of equipment to 15 to 20 seconds, from the previous 15 to 20 minutes."

"This system significantly enhances the battalion’s ability to redeploy a wide range of vehicles and cargo in a short period of time, and can be operated with only two to three people,” Speaks said.

AFSBn-Kandahar redistribution property assistance team officer-in-charge, captain Linda Hefner, said the system has reduced the time for manual weighing and measurement of equipment to 15 to 20 seconds, from the previous 15 to 20 minutes.

Intercomp Company representative Eric Larson, which trained the brigade on equipment operation, said the acceleration of process of preparing for air shipment will save on personnel resources, while improving manoeuvring of forces at the operational and strategic levels.