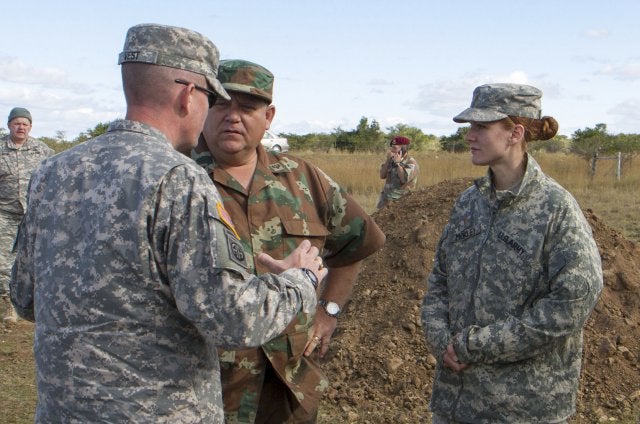 The US military is conducting a joint military training exercise, code-named Shared Accord 13 (SA 13), with the South African National Defence Forces (SANDF) near Port Elizabeth in South Africa.

Scheduled to be carried out in the eastern cape cities of Port Elizabeth, Grahamstown and East London, the annual training exercise involves participation from around 700 US personnel from the army, marines, navy and air force, alongside more than 3,000 SANDF members.

The joint peace-keeping and humanitarian exercise will feature a broad spectrum of training missions to validate the operational capabilities of both militaries.

"We’re improving each other through this exercise."

"The South Africans have a lot of experience and really we’re just sharing. We’re not training them on anything. We’re improving each other through this exercise," Slagle said.

Besides tactical training, the exercise will also include a Humanitarian Civic Action (HCA) event, during which the US and South African military medics will provide health services, including dental, HIV screening and ophthalmology services to civilians.

The US military is deploying its light medium tactical vehicle (LMTV), high mobility multipurpose wheeled vehicle (HMMWV), and a deployable headquarters for the exercise, which is scheduled to conclude on 7 August.

Exercise Shared Accord aims to increase the ability of both US and South African forces to respond to humanitarian disasters and peace keeping operations worldwide.

Image: US Army and SANDF personnel discuss plans for Shared Accord 13 at a reconnaissance site near Bhisho in South Africa. Photo: courtesy of US Army.

The Military Satellite Market in South Africa to 2024: Market Brief

The Electronic Warfare Market in South Africa to 2025: Market Brief

The Military GPS/GNSS Market in South Africa to 2023: Market Brief