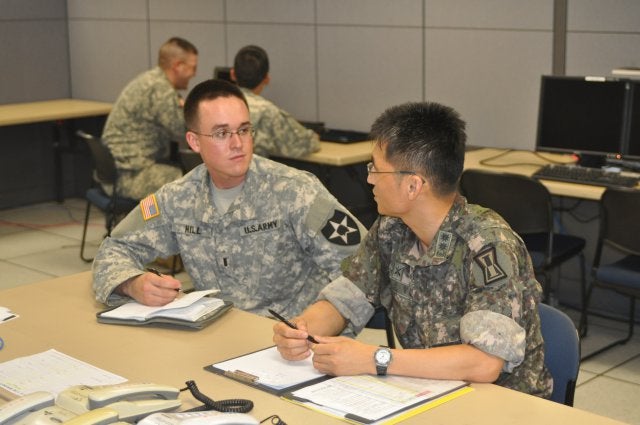 The US and the Republic of Korea (ROK) Armies have conducted a combined counterfire exercise at Camp Casey, South Korea, to enhance coordination and test battle command computer systems.

The 210th fires brigade, second infantry division of the US Army and the third Republic of Korea Army (TROKA) participated in the simulation-based exercise, which had been designed to enhance the ROK-US counterfire capability.

"That goes from using our equipment properly, sharing data, command and control relationships between our subordinate battalions, our brigade headquarters and TROKA," Dangler said.

In addition, the exercise was designed to strengthen the alliance between participating nations, to ensure fight tonight readiness and deter any threats toward the South Korea.

"The exercise was designed to strengthen the alliance between participating nations, to ensure fight tonight readiness and deter any threats toward the South Korea."

During the drill, new leaders were able to test their skills without having a large logistical impact on their units.

Dangler said the units will be trained with constraints including training areas, budgets, weather, simulation and constructive virtual training, which is becoming a bigger and bigger tool.

The 210th fires brigade liaison officer to TROKA captain, Lee Wright said: "In the simplest form, all we’re trying to do is to bring people together, form good relationships and make it to where we have a fully-functioning relationship."

The combined counterfire exercise is the first brigade-level training event conducted since the majority of the brigade’s seniors were transitioned to new leaders.

"It gives confidence when you take a step back and the exercise ends," Dangler added.