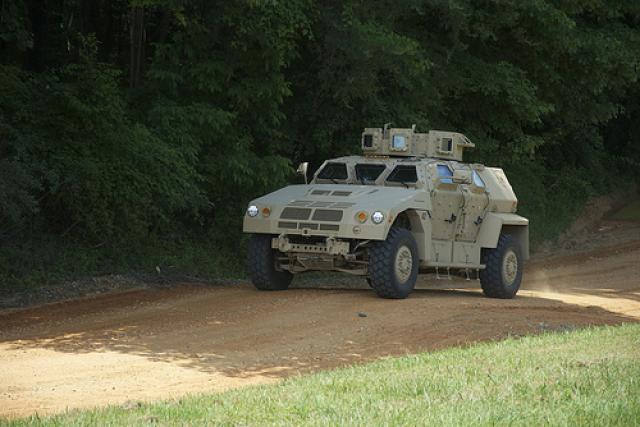 The US Army and Marine Corps have put their multi-billion dollar Joint Light Tactical Vehicle (JLTV) programme on hold following protests by losing bidder Navistar Defense over the selection process.

Navistar, one of the three bidders to be denied the programme’s engineering, manufacturing and development (EMD) contract announced on 23 August, has filed a complaint in the Government Accountability Office (GAO), citing dissatisfaction over evaluation criteria.

Navistar spokesman Elissa Koc was quoted by Defense News as saying: "Following our debrief with the government, the company has concerns regarding the selection process and we’ve requested a review."

Other losing bidders include General Dynamics, Northrop Grumman and BAE Systems, which had previously partnered with Navistar for the technology development (TD) phase contract.

"Following our debrief with the government, the company has concerns regarding the selection process and we’ve requested a review."

The US Military held the source selection evaluation results debrief on 30 August, which was also attended by BAE, whose spokesman Stephanie Bissell Serkhoshian said the company is ‘currently considering how to proceed. At this time no decision has been made’.

Navistar had independently proposed a variant of its International Saratoga light tactical vehicle, launched by the company following self automotive and blast testing in October 2011, for the 27-month EMD contract.

Lockheed Martin, Oshkosh and AM General were recently awarded JLTV contracts worth $66.3m, $56.4m and $64.5m respectively for the production and delivery of 22 prototypes each within 12 to 14 months for government analysis and testing.

The JLTV programme is aimed at replacing the army and Marine Corps’ current fleet of ageing and outdated high-mobility multipurpose wheeled vehicles (HMMWVs), which served in combat for more than 25 years.

Around 50,000 vehicles are expected to be purchased by the army with options for additional units, while the USMC is planning to acquire 5,500 vehicles.

Image: BAE System-Navistar JLTV during technology demonstration phase at the US Army Proving Grounds in Arizona, US. Photo: US Army.