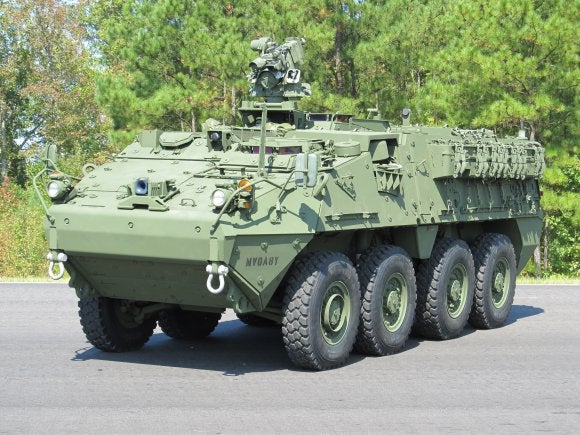 Awarded by the army’s tank-automotive and armaments command (TACOM)and lifecycle management command (LCMC), the $118m contract covers conversion of a total of 66 vehicles.

Involving an exchange of flat-bottom Stryker hulls for the newer DVH design, the Stryker DVH-exchange pilot programme was jointly launched by the army and the company in response to a requirement for additional DVH vehicles and to lower the overall vehicle cost in 2012.

The programme was originally focused on evaluating if components from the legacy Stryker flat bottom hull (FBH) variants can be rapidly refurbished and installed on DVH, at a lower cost to developing a new vehicle.

Executed by GDLS and the Anniston army depot, the programme was successfully completed in April 2013 with delivery on time and under budget of 52 Stryker vehicles to the army.

"Stryker is an eight-wheel drive armoured vehicle, designed to provide infantrymen with enhanced protection and survivability against artillery fragments, roadside mines and IEDs."

The first brigade of double-V hulls-equipped Strykers was deployed in 2011 to enhance protection of Stryker-borne soldiers against roadside mines and improvised explosive devices (IED) blasts in the battlefield.

Around two brigades of double-V hull Stryker vehicles were manufactured between July 2010 and July 2013.

Final assembly work under the contract will be carried out at Anniston army depot in Alabama, US, with deliveries set to commence in July 2014 and complete by February 2015.