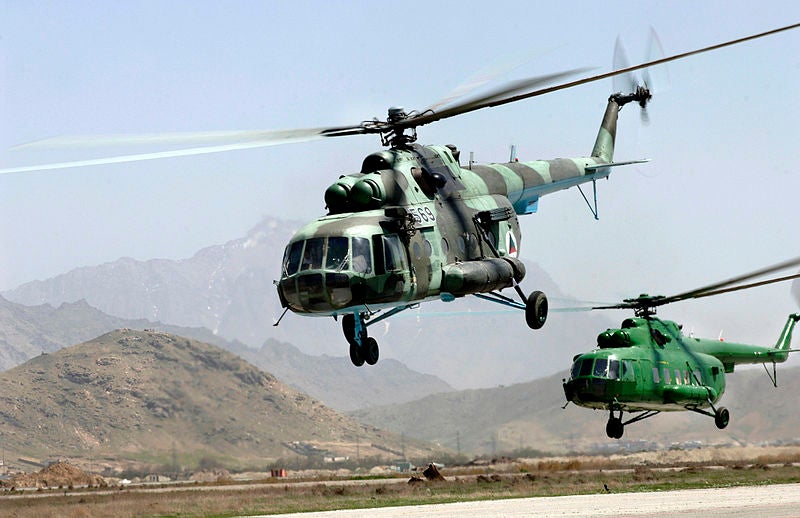 The US Department of Defense (Dod) has signed A contract with Russia for additional Mil Mi-17V5 military transport helicopters to be delivered to the Afghan National Army (ANA).

The contract was agreed between the two parties as part of a joint effort to combat terrorism. It was signed between Russian state-arm-exporter Rosoboronexport and the US Army in Paris, France, RIA Novosti has reported citing a statement from Russia’s Federal Service for Military-Technical Cooperation.

Without providing any information regarding the contract value and number of helicopters to be supplied, the statement also highlighted that the two sides expressed hope to extend cooperation in the defence and technology sector.

Rosoboronexport deputy head Alexander Mikheyev later claimed the contract was to cover delivery of 30 Mi-17V5 helicopters, but declined to reveal its value.

The Mi-17 helicopter contracts have been widely criticised by US Senators who allege that Rosoboronexport has supplied equipment, including helicopters, to the Syrian Government.

"The decision to acquire additional helicopters from Rosoboronexport followed the failure to find an alternative, with many ANA personnel having already been trained to operate the Russian aircraft."

Meanwhile, in an e-mailed statement to the RIA Novosti, Pentagon spokesman James Gregory said the decision to acquire additional helicopters from Rosoboronexport followed the failure to find an alternative, with many ANA personnel having already been trained to operate the Russian aircraft.

Moscow also announced the receipt of payments from Pentagon last month, for the supply of 12 Mi-17V5 helicopters to ANA in late-2013.

The shipment represents an option agreement of the original $367.5m contract awarded by the DoD to Rosoboronexport for delivery of 21 Mi-17V5s, along with spare parts, ground-service facilities, detachable armaments and logistical support to Afghanistan, in May 2011.