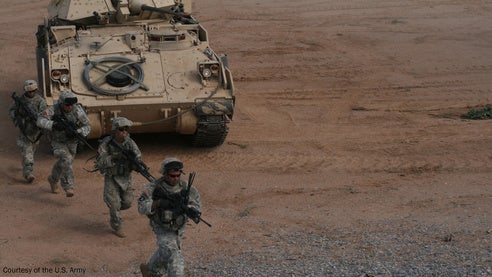 Lieutenant Colonel John Cross, commander of the 1st Combined Arms Battalion, 18th Infantry Regiment, 2nd HBCT, said the addition of the systems to the Vanguard Nation and the Dragon Battalion will make the Dagger Brigade the most lethal brigade in the US Army.

The Bradley has been integrated with a new video monitor in the troop carrying compartment, which will provide infantry squads with better situational awareness, and an improved independent thermal viewer has been added to increase the capability of vehicle crew.

M1A2 SEP V2 Abrams Tanks, primarily used for identification and destruction of enemy targets located in excess of 4,000m away, are also equipped with new features, including a fire control system to increase its lethality and protective capabilities.

"The optics [system] has finally caught up with the ammunition," Henderson added.

"The ammunition has always been able to kill at extended ranges but the previous optics did not allow us, in some cases, to positively identify targets beyond 3,000m."

The crews belonging to the 1st Battalion, 63rd Armor Regiment and 1st Battalion, 18th Infantry Regiment are scheduled to commence new equipment training in late April 2012 and continue with training in wake of an early 2013 rotation to the National Training Center at Fort Irwin, in California, US.

Additional tanks and vehicles are scheduled to be delivered to the 1st HBCT, in a bid to upgrade its vehicle fleet in late 2012.

Image: US Army’s latest M2A3 Bradley vehicles on Fort Riley roads, prior to delivery to 2nd HBCT. Photo courtesy of: US Army.