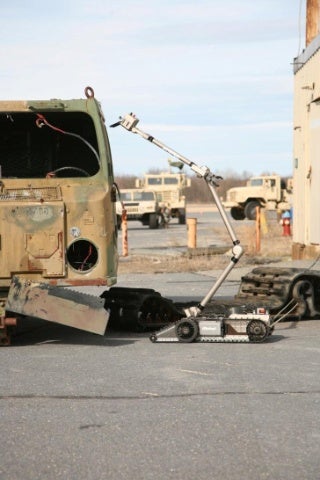 iRobot has received a contract from the US Army’s Robotic Systems Joint Program Office (RSJPO) for delivery of systems over the next four years.

The company will also supply associated spare parts as part of an initial $3m order under the contract.

"’The army recognises the value of the PackBot FasTac robotic system on the battlefield, and we look forward to continuing our work with RSJPO to ensure the army is well equipped to maintain its fleet of PackBot FasTac robots in the years ahead," Wilson said.

"The robot can climb stairs, navigate narrow passages, and travel across tough terrain at speeds of up to 5.8mph."

Weighing around 24lb, the 510 PackBot is a modular, multi-mission robot designed to assist soldiers and first responders in conducting bomb disposal and improvised explosives device (IED) neutralisation, as well as surveillance/reconnaissance missions from stand-off distances.

Equipped with a range of interchangeable payloads and easily deployable by one person in less than two minutes, the combat-proven robot can also be configured to screen vehicles, search buildings, bunkers, caves and tunnels, as well as other missions according to requirements.

Easily loaded into a MOLLE pack, the trunk of a car or a helicopter, the robot can climb stairs, navigate narrow passages, and travel through rock, mud, snow and other tough terrain at speeds of up to 5.8mph.

Deliveries under the contract are scheduled to complete by the end of the fourth quarter of 2013.