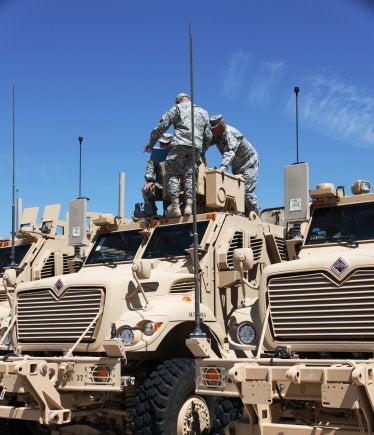 Conducted with support from the Army Test and Evaluation Command (ATEC), Brigade Modernisation Command (BMC) and the 2nd Brigade Combat Team, 1st Armored Division (2/1 AD), the exercise’s objective is to install the network across brigades and also help developers and brigade staff evaluate its functionality.

SoSI project manager colonel Gail Washington said the command brought in every node and vehicle to perform a connectivity check during the VALEX.

"We’re doing a lot of integration work, along with shooting satellite signals to Aberdeen Proving Ground and Fort Gordon, which is the regional hub," Washington said.

"We’re also running validation threads, which will allow us to pass position location information, calls for fire, send an email and various other communication tasks."

"We’re doing a lot of integration work, along with shooting satellite signals to Aberdeen Proving Ground and Fort Gordon, which is the regional hub.”

Execution phase will see operation of the network with all systems configured and validated at individual system levels by the 2/1 AD soldiers during the brigade’s garrison communication exercise (COMMEX), scheduled to take place this week.

The faulty systems are issued a trouble ticket, and rectified by a field service representative (FSR), ensuring they are trouble free when actually deployed for the NIE, Washington said.

NIE 13.1 is scheduled to be conducted at White Sands Missile Range in New Mexico, US, in October and November.