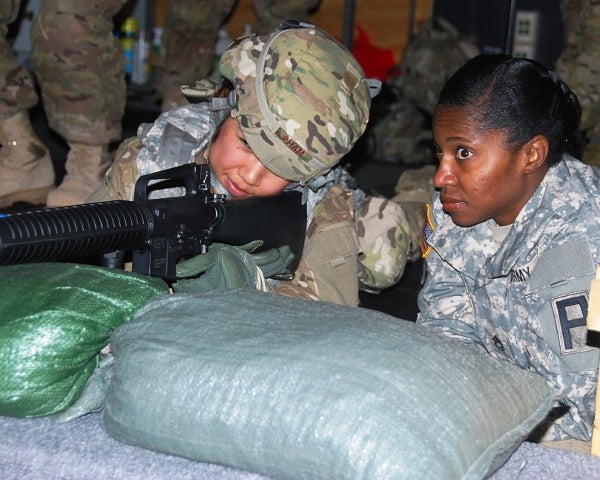 The US Army is using the Engagement Skills Trainer (EST) 2000 to provide mobilisation training to reserve-component service members prior to global deployments at Joint Base McGuire-Dix-Lakehurst in New Jersey, US.

Manufactured by Cubic, the EST 2000 is a visual weapons simulator computer system designed to enable service members to carry out cost-effective marksmanship training and other weapon exercises in numerous environments without ammunition restrictions.

"It gives immediate downrange feedback used to group and zero a weapon prior to going out on a live-fire range."

The simulator is capable of supporting three training modes, including marksmanship, squad/fire team collective and judgemental use of force, which are validated by the US Army Training and Doctrine Command (TRADOC).

Integrated with compressed air to simulate a rifle’s kick, the trainer allows operators to train on multiple small arms and squad weapons systems, such as the M-9 semi-automatic pistol, M-4 carbine, and M-2 Browning machine gun, prior to advancing to the actual weapons range for qualification on their deployment munitions.

The 174th Infantry Brigade 314th Infantry Regiment 1st Battalion EST 2000 trainer/mentor sergeant 1st class David George said the simulator was beneficial to users due to its ability to display a clear representation of their shot patterns.

"It gives immediate downrange feedback used to group and zero [a weapon] prior to going out on a live-fire range," George added.

In addition, the simulator can also be used to practise target engagements in realistic combat situations, which enhance operational readiness of the soldiers deployed multiple times.

The system can be easily configured according to user specific requirements, and is also used by the First Army Division East to replicate vehicle convoy training, crew team react-to-contact training, as well as to simulate vehicle rollovers.