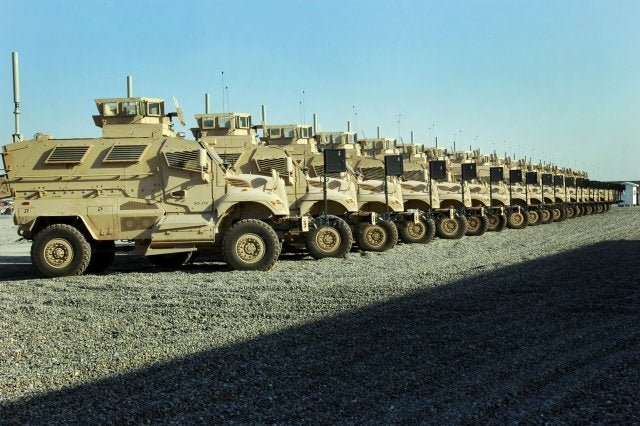 The US Army is devising a long-term plan to help preserve its fleet of 20,000 mine-resistant, ambush-protected vehicles (MRAPs), following the completion of the mission in Iraq and strategic withdrawal from Afghanistan by the end of 2014.

Colonel Mark Barbosa, US Army G-8 department director and focused logistics division chief, said that roughly 60% of vehicles would be kept in storage or prepositioned stocks. While 30% would be deployed with brigade combat teams to help in troop transport and route clearance missions, with 10% used for home-based troop training.

"The MRAPs were a very successful programme. The $45bn investment had Office of the Secretary of Defense oversight, with very strong support in Congress," Barbosa added. "The platform was rushed to theatre to protect our soldiers and it did very well."

According to Barbosa, the preserving of MRAP fleet will also support the army’s overall fleet strategy, including its plans to field an advanced, MRAP-like protection equipped joint light tactical vehicle (JLTV) by 2016.

"The MRAPs were a very successful programme… The platform was rushed to theatre to protect our soldiers and it did very well."

Tim Goddette, sustainment systems director for the Office of the Assistant Secretary of the Army for Acquisition, Logistics and Technology (ASA(ALT)), said that the reset and sustainment process for the current MRAP fleet would involve work at the Red River and Letterkenny Depots, to bring more of the vehicles into a common configuration.

"Even after the war, MRAPs are going to continue to play an important role as an interim capability for the next ten years until JLTV comes on line in sufficient quantities," Goddette added.

"The JLTV will bring the MRAP-level protection that we need, and the on-board power we will need for current and future networks. Also, the JLTV will have an off-road mobility and system reliability that will exceed what we have in MRAPs."

Following completion of the technology development (TD) phase, the JLTV is now scheduled to enter the engineering and manufacturing development phase of the programme.

The MRAPs form only 7% of the army’s wheeled vehicle inventory, as opposed to the JLTVs, which make up roughly one-quarter of its total tactical wheeled vehicle fleet, according to the army officials.

Image: The first batch of US Army’s MRAP vehicles stationed at Camp Liberty in western Baghdad, Iraq. Photo: courtesy of the US Army.